Everyone has a different idea of the must-see sights in a city and we’ve tried make our top ten a mix of the popular choice with a couple of curve balls, favourites of ours that aren’t so busy and are a little off the beaten track. 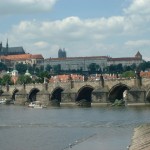 1. Charles Bridge
Often the foreground element in many a postcard of Prague, Charles Bridge is teeming with people from dawn to dusk. Whether they’re just using it to cross from Old Town to Mala Strana or pausing at each of the many statues, especially the one of St John of Nepomuk, which is said to bring you luck if you touch the plaque at the base of it. In daylight hours the bridge is lined with portrait and caricature artists, musicians and postcard and trinket sellers. 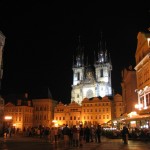 2. Old Town Square
This is Prague’s heart and an essential place to spend some time in. Dating back to the 11th century, Old Town Square was Prague’s main marketplace till the turn of the 20th. Admire the beautiful pastel coloured buildings around the square, sit by the statue of Jan Hus, catch the cuckoo show of the Astronomical Clock (not really worth it in my opinion, but a hundred or so people every hour would disagree). If you have time, go up the clock tower for a top-down view of the square and its surroundings. At night the square is illuminated beautifully and the gothic Church of Our Lady before Tyn, just behind the square looks like something out of a batman movie. Around Christmas and Easter there’s a market in the square selling trinkets but also various types of traditional food and drink. Warm yourself up with a mulled wine or mead. 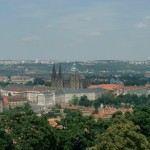 3. Prague Castle & St Vitus Cathedral
Perched on a hill on the left bank of the Vltava is the largest castle complex in the world. It takes several days to explore the Prague Castle complex fully. It is said that President Vaclav Klaus, currently in his second term in office, han’t seen all of it. Tickets are valid for two days just to give you enough time to see things. Even if you don’t do a castle tour, there’s plenty to see outside, including St Vitus Cathedral, Golden Lane and the Castle Gardens. 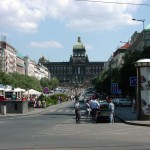 4. Wenceslas Square
Vaclavske Namesti (in Czech) was the scene of various important events in the country’s history but generally isn’t that pleasant. The city council have plans to completely pedestrianise it, and they’ve made life difficult for the touts and fast food stands but it has a way to go yet. Many visitors remark that it is also not very ‘square’. At the top of the square you’ll find the statue of St Wenceslas on a horse and beyond that, the National Museum. A Czech friend once described it as a museum museum, that is to say, a museum of how museums used to be. Many museums have moved away from the archetypal ‘things in a glass case’ approach and become more interactive. Not so the Narodni Muzeum. You might just want to see it from the outside, but then you’d miss the staircase that was used in the embassy scene of the first Mission Impossible film starring Tom Cruise. 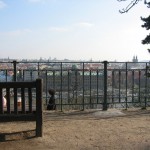 5. Letna Park
On the left bank of the river, upstream of Mala Strana is a hill that starts right at the embankment. Its most visible landmark is the metronome, which you can see if you walk up Parizska from Old Town Square. There used to be an enormous status of Stalin on the plinth which was destroyed after Kruschev exposed his crimes. Climb the stairs from the embankment up to the plinth and you’ll find yourself in Letna Park, a great place for a stroll and very popular with locals. If you turn right after the steps you’ll come to a beer garden with the best view in the city. Enjoy a cold beer and kielbasa (klobasa) straight off the grill as you take in the panorama. 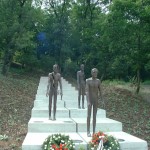 6. Petřín
Petrin Hill has a number of sights and attractions, including the lookout tower mentioned in our recent post about Prague’s Towers, an Eiffel Tower-like steel construction with intertwined staircases. If you start out at Ujzed, there’s a memorial to the victims of Communism right at street level, unveiled in 2002, then you can take the funicular railway almost to the top. Once at the top head to the mirror maze and the lookout tower. 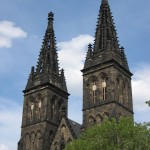 7. Vysehrad
Being out of the center (but easily reached by metro – it has its own stop, or by foot from the river), Vysehrad is a little off the beaten track and has less tourists. Another place with several sights, Vysehrad (literally high castle) and has been of royal and military significance since the 10th century. At its best on a sunny afternoon, you can stroll round the ramparts, take in the stunning views of Prague Castle and the Vltava river, have a sombre peruse of the cemetery next to the Basilica Minor where many of the Czech great and good are buried, then top it off with a bite to eat and a beer at one of many eateries within its walls. 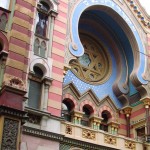 8. Jewish Prague
While most of the other items on the list are easily explored on your own this is one where a guided tour makes a lot of sense. The points of interest being scattered in numerous streets means making your way from Kafka’s birthplace around the Jewish Quarter to see the synagogues, cemetery and other sights will be much simpler on a walking tour. 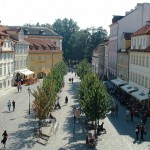 9. Kampa
Beneath Charles Bridge, towards Mala Strana is Kampa Island, easily accessed by a staircase off Charles Bridge. It provides a quiet refuge from the madding crowds on the bridge with its picturesque square and green space beyond. Nothing incredibly spectacular to see but the island is home to a number of excellent restaurants as well as a nice place to picnic. 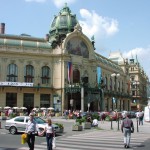 10. Municipal House and Namesti Republiky
Obecni Dum (the Municipal House) was built as a representative building for the Czech kingdom before Czechoslovakia came into being and the Czech lands were still part of the Austro-Hungarian empire. Designed to counterbalance the German influences in the city. Built in Art Nouveau style and thoroughly renovated in the 90s, this wedding cake of a building is beautiful inside too. It has concert halls and exhibition spaces. If there any exhibitions or concerts on that you’re interested in, pay attention to the building too as much of it is roped off from casual visitors. The cafe in the left wing of the building as you enter was used in XXX starring Vin Diesel (where he escapes a sniper by using a silver tray as a mirror). In the basement the Pilsner Restaurant pours a decent beer and the food’s not too bad, though a little overpriced. Across the square is the massive Palladium shopping mall, if you’re in need of some retail therapy (or a Starbucks or Costa coffee).

Planning a trip to Prague? We’d love to put together a Prague travel package just for you. Get in touch to find out more!What would you put in your Prague top ten?