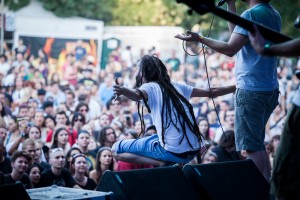 The people of Budapest sure love their festivals, no weekend from Spring thru Fall is without some kind of happening. Here we’ve picked a few that stand out. Click on a festival title to visit the official website for each and find out more.

From Dixieland to Orchestra-performed Film scores by way of Gypsy-Flamenco Fusion and Opera, the Budapest Summer Festival, taking place on Margaret Island, brings together all kinds of performances, usually starting at 8pm.

Situated in the City Park, Vajdahunyad Castle might look a little out of place, based it is on (and named after) a castle in Transylvania and features a mix of architectural styles. But all that is just the backdrop to a series of open air classical, opera and Klezmer performances. Tickets are €10 or €15 depending on each concert, with no tiered pricing or seat reservations.
Performances take place on Monday and Thursday evenings.

Sziget Festival
August 5 – 12
Prefer your music a bit more contemporary? Obuda Island in the heart of Budapest is once again the location for the biggest music festival in Central Europe. 4 stages of music from Pop & Rock, to World Music feature international big name stars and local talent as well. 400,000 people were there last year. One-day tickets are €49 and a five day pass covering all the days with the big names will run €199.

Europe’s largest Jewish cultural festival casts a wider net than you’d expect, seeking to appeal to Classical, Klezmer, world-music, jazz and pop-music fans. Performances (3-4 per day) at a wide range of venues throughout the city, from theatres to Budapest’s hippest ruin pub. Ticket prices start from around $20.

Szeptember Feszt
September 6 – 8
A food-centric festival but with plenty of entertainment to accompany the bites. Located in Nepliget Park (the People’s Park) in Budapest’s 10th district, you’ll find the opportunity to taste the diversity of Hungarian cuisine. The English-language version of the site, at the time of writing, still refers to the 2011 dates and event details.

Buda Castle district is the place to be for winelovers for several days this September, as it has been since 1991. You pay a one-day entry fee of 2800 Forints, (under $13) for a package that includes a crystal tasting glass (and a glass carrier to wear round your neck) and free entry passes to the Hungarian National Gallery and the Budapest History Museum. You can leave and re-enter as often as you like on that day as long as you don’t remove your armband. The festival showcases wines from all of Hungary’s wine-growing regions as well as local delicacies, sold at reasonable prices.