The countries in the Caucasus region, Armenia, Georgia and Azerbaijan, are ideal for a multi-country tour. Each of the capital cities provides a bite-sized taste of its country but you’ll want to get outside of the cities to get the true feel for these bewitching lands. Thousand year hilltop old monasteries, a wine-making tradition that predates almost anywhere in the world, countless natural wonders and cuisines that will make you wonder why you haven’t heard more about them. Let us show you the Caucasus, the JayWay.

Although every Caucasus vacation package we create is unique, there are some popular routes and itineraries that we are asked for frequently. Our sample itineraries provide some ideas for you to consider as a basis for your own private tour combining all three or any two of the countries in the Caucasus region. For each of these itineraries you can get a rough idea of the price using the Price Guide function. We cover many more destinations in these three countries than those listed here, and our expert trip planners will work with you to incorporate any places in Armenia, Georgia or Azerbaijan you want to go. 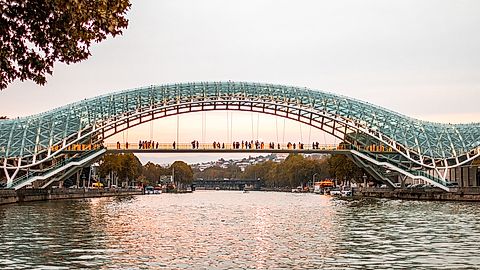 Capitals of the Caucasus 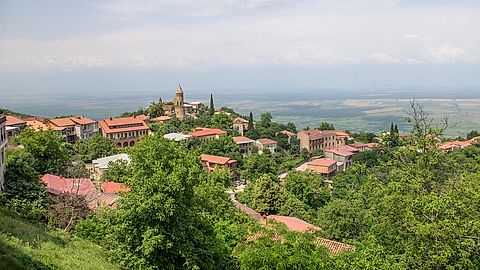 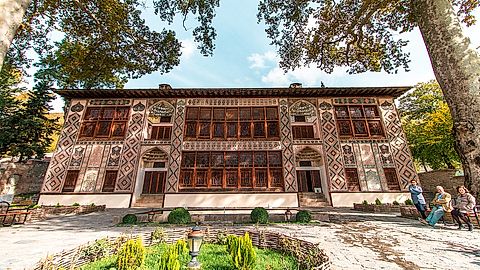 A Caucasian Adventure in Azerbaijan and Georgia

Average of our Guest's Ratings of our Caucasus Vacation Packages

Our Caucasus vacation packages provide a hassle-free way to see these captivating countries. We take care of all the details, all you have to worry about is enjoying the one-of-a-kind experiences that will make this the vacation of a lifetime. Below you’ll find the most recent three reviews and testimonials from guests who have visited the Caucasus with our help recently. 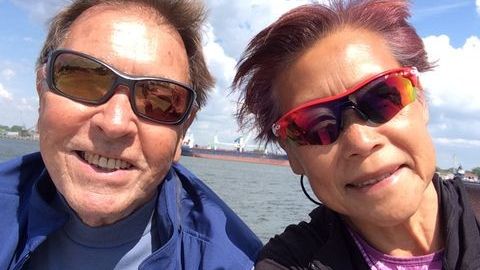 JayWay is a unique, full service boutique travel company, and provides a very high level of customer service.  They have the information and resources an independent traveler to a new country would need for a memorable adventure.

JayWay is a unique, full service boutique travel company, and provides a very high level of customer service.  They have the information and resources an independent traveler to a new country would need for a memorable adventure. 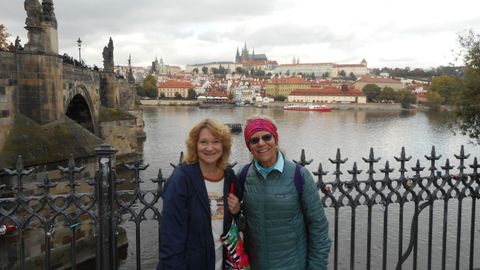 JayWay Travel makes it so easy and convenient. The best customer service ever. I have had three tours with JayWay Travel and will never use another tour service. If JayWay Travel doesn't serve that part of the world, I won't go there.

JayWay Travel makes it so easy and convenient. The best customer service ever. I have had three tours with JayWay Travel and will never use another tour service. If JayWay Travel doesn't serve that part of the world, I won't go there.

The Caucasus – At the Very Edge of Europe

For some, the Caucasus (or the South Caucasus to be more precise) is considered its own region entirely. It bridges the gap between Europe and Asia to some extent. Armenia was in fact the first country to adopt Christianity as its official religion, back in the 4th century. Georgia as a country, and Georgian people, are resolutely European, whereas Azerbaijan has many cultural and architectural ties to Turkey and has elements of Dubai too, thanks to its oil wealth. From the 6th to 14th centuries a branch of the Silk Road traversed the Caucasus region and evidence of intermingling of cultures is visible to this day.

As you can imagine, with such a depth of history and diversity, this makes for a fascinating region to visit. While you could just focus on the capitals, to truly experience the striking landscapes and the history of the region, you’ll want to allocate some time to places beyond the big cities. With the day or overnight stops on private transfers that we arrange, you can do just that. We can even take you to one of the most remote villages in all of Europe, UNESCO listed Ushguli in Georgia’s Svaneti region.

You’re in the best hands

Our expert Caucasus travel advisors and trip planners will work with you to create your dream vacation itinerary. You’ll stay at the very best hotels for your taste and budget. You choose how you want to spend your days, either enjoying day trips and city tours with our trusted partners or taking a day off to wander on your own. Before you arrive and during your trip our on-the-ground staff in Tbilisi, assisted by our partners in Baku and Yerevan, are on hand by phone or email for any help you need. With our years of experience in arranging trips in the Caucasus we’re perfectly placed to create the most memorable trip you’ve ever experienced.

Why Travel with JayWay?

Planning an amazing trip takes time. Our friendly travel advisors and experienced trip planners will listen to your needs and craft your personal dream itinerary. We will maximize your vacation time and enjoyment – we know the best way to get around and how to spend your hard-earned time off.

You’re in safe hands from the very beginning. Even before you arrive your dedicated tour manager in Europe will be in touch to help you prepare. When you arrive they’ll meet you and be available by phone, email and IM for the rest of your journey with us, for anything you need.

Travel can create memories that last a lifetime. You’ll return home with indelible recollections of beautiful sunsets, magical vistas, fascinating stories, and meals so delicious you’ll want to fly back every time you think of them. This is why we do what we do.

Want to know a secret? Your next trip with us will be even better! Based on what we’ve learned from working together, your second, third and tenth trip will get better every time. We treat our dedicated and hard-working staff like family and that’s how they look after our guests. We keep expanding our family, and our map, with 30 countries and counting, because once you’ve traveled the JayWay, anything else just isn’t good enough.

Frequently Asked Questions about Travel to the Caucasus

What is the best way to travel to the Caucasus?

Most of our guests travel to the Caucasus from the US by air, unless they are already traveling in a neighboring country. With timezones and very few workable direct flights (JFK to Baku is the only one) you will likely need to change somewhere en route. The best prices and routings tend to be with Turkish or Ukrainian Airlines as they usually have good connecting flights to all three capital cities in the Caucasus.

I’ve heard it’s not possible to cross the border between Armenia and Azerbaijan. How can we visit both countries?

The short answer is “via Georgia”. The long answer is that yes, it is not possible to travel directly between Armenia and Azerbaijan because of the dispute over the Nagorno-Karabakh region of Azerbaijan, also known as the Republic of Artsakh.

Where should I start my tour of the Caucasus?

If you are visiting all three countries of the Caucasus we highly advise starting in Baku, the capital of Azerbaijan, then traveling to Georgia, and ending your trip in Armenia. Due to the poor relations between Azerbaijan and Armenia, the immigration officers in Azerbaijan can be rude and will quiz you about why you have an Armenian stamp in your passport. The Armenians tend to give you an easier time.

When is the best time of year to visit the Caucasus?

Being quite far south you expect mild winters in the Caucasus, but aside from the coastal cities, it can still be quite cold in winter. The months of April to June have relatively mild weather. July and August can be very hot in some parts. The higher elevations in mountainous regions in Georgia such as Kazbegi and Svaneti, or Dilijan in “Armenia’s Switzerland” can be pleasantly cool however. September, October and into November can be very comfortable in many parts. You might want to coincide your visit with one of the region’s wine harvest festivals in September.

How many days do I need to see the Caucasus?

If you are concentrating just on the capital cities, a ten day itinerary gives you just about enough time, but a two week trip will be more relaxed as well as allowing you to see more of each country. Some time in the countryside to admire the dramatic landscapes should be an integral part of any trip to the region.

Which other countries could I combine with a trip to the Caucasus?

The easiest country to combine with a trip to the Caucasus is Ukraine, particularly if you are flying with Ukrainian Airlines – you can usually add a couple day layover in Kyiv to your ticket at no extra cost.

What’s the best way to get around the Caucasus?

There are very few rail links in the Caucasus and while there are night trains between Baku and Tbilisi, and Tbilisi and Yerevan, it is hard to recommend them. We usually arrange private transfers between cities, especially if stopping overnight somewhere in the countryside along the way. If time and cost are factors, short hop flights between the capitals are a good option. One form of transport we absolutely cannot recommend is driving yourself. Driving in the Caucasus is not for the faint of heart and is best left to experienced locals.

Which is the best country to visit in the Caucasus?

We try not to play favorites with our destinations, instead it depends what you’re looking for from a vacation. Our travel advisors are at your disposal to discuss and help you choose. Should you wish to concentrate on just two countries, we would suggest Georgia and Armenia as they are both quite different and will give you a good overview of the region.

Which currencies will I need in the Caucasus?

Each country uses its own currency: the Armenian dram, Azerbaijani manat and Georgian lari. You can very easily change US dollars or Euros. You can’t change Armenian currency in Azerbaijan, and vice versa due to the aforementioned situation between the two countries.

Do they speak Russian in the Caucasus?

Each country has its own language: Armenian, Azerbaijani and Georgian. None of these languages are part of the Slavic language group, which contains Russian. When these countries were part of the USSR, Russian was taught in schools. Many older people still know Russian but it is less common for younger people to learn it. In Georgia particular there is significant anti-Russian sentiment so it’s better to stick to English there, even if you know some Russian.

To the east of Georgia lies the Black Sea, and close to Batumi you can find many beaches. Azerbaijan lies on the Caspian Se and there are several beach clubs close to Baku that you could visit during your time there.

Our customized Caucasus vacation packages include accommodation, excursions, transportation, and the support of our local representative in the Caucasus. As these are private tour packages, they are based entirely on your choice of dates, interests, and accommodation preferences.

Do you offer small group tours in the Caucasus?

We do not. Rather than offer tours that might fail to reach the required minimum to guarantee departure, we prefer the more flexible option of private tours. The cost is not significantly higher. If you would like to join a small group day tour during your trip, we can absolutely arrange that.

How many UNESCO World Heritage Sites are there in the Caucasus?

Each of the three countries in the South Caucasus have three UNESCO World Heritage Sites. They all have many more on the Tentative list, many of which are well worth visiting too.

Where is the Caucasus region?

The Caucasus region, or more specifically, the three South Caucasus countries of Armenia, Georgia, and Azerbaijan, are located to the east of Turkey and south of Russia.