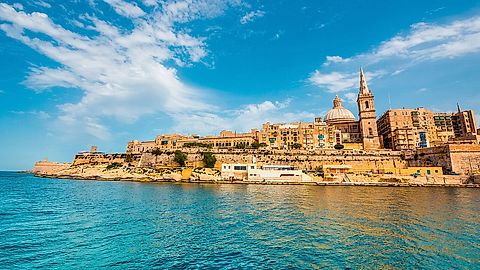 This tiny island nation (population 300,000) might seem insignificant, but it has been in the middle of the action of several pivotal international conflicts. Located to the south of Sicily and a short hop by plane from Catania, it shares much of the same history as its much larger cousin, but with a few key differences.

Malta’s strategic location in the Mediterranean between Italy and Africa makes it an ideal fortress island, and when you first see Valletta’s mighty bastions you’ll see just what that means. After being routed from Rhodes by the Ottomans, the Knights of St John were given the island of Malta by Holy Roman Emperor Charles V. The Knights built up the defenses and when the Ottomans came calling, with a massive naval fleet and many troops, they managed to repel them. It is this feat which earned Malta praise as the defender of Christendom.
The Knights' power waned in the late 1790s and Napoleon took the island through betrayal. But French rule wasn’t something the Maltese people enjoyed and they asked the British, at war with France at the time, to rid them of the French. In 1800 Malta became a protectorate of Britain and remained that way until an independence referendum in 1964. During that time Malta was the launchpad for a turning point of WWII, the invasion of Sicily, and subsequently Italy. The British navy finally set sail back home in 1979, and the island had to turn to other means of financial support.

Malta’s economy these days is a combination of tourism, financial services, and online gaming. An expat-friendly environment (everything’s in both English and Maltese) has swelled the island’s population. Visitors from the UK will feel especially at home: red phone boxes and post boxes and a plethora of British high street stores are a reminder of the countries' close relationship.

Maltese cuisine might come as a pleasant surprise. It’s a culmination of the fish, meat, vegetables, and spices available locally and things brought by the island’s various occupiers. Unlike monocultural Sicily, there’s a big appetite for foreign food too, so you definitely won't be bored.

Don't miss out on Gozo

The country of Malta is actually made up of two islands, Malta and Gozo. Ask any Maltese and they’ll tell you "Gozo is where you go to unwind." Tiny Gozo is more rural than Malta, the western coast of which is lined with towns and cities. The main town of Gozo is Vittorija or Rabat (you’ll have to get used to the fact that places have two, or sometimes three names here). A thirty minute car ferry connects the islands so it’s a very easy day trip.

Malta is easy to get around

Back on Malta, the capital Valletta is situated on a fortified peninsula just 630 meters wide and 900 meters long. In most other countries the neighboring areas of Sliema and St. Julian’s would simply be suburbs of the capital but here they have their own identities. Each has its merits as a place to stay and for this reason we’ve picked out hotels in each of them for you to use as a base. During the trip planning process we’ll work with you to pick the right option for you. Moving between them is easy, with inexpensive public transport and ferries.

Our suggested itineraries in Malta and neighboring countries allow you to enjoy a multi-destination tour with ease. Our vacation packages make traveling in Central & Eastern Europe hassle-free. We take care of getting you from place to place, accommodation, excursions and activities.