Vienna for the Young

If you’re headed to Vienna with kids in tow, you’re in for a treat. Fortunately, the Austrian capital isn’t just museums and marble statues. The stately capital is full of innovative museums, joyful activities, and verdant parks, as you’ll find below. 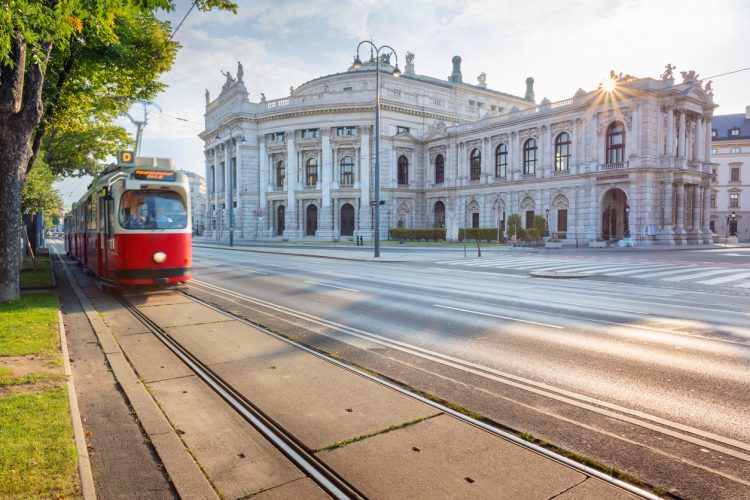 You can take your pick of major sights by riding on the the D trolley line, which runs down the Ring Road (“Ringstrasse”) that nearly encompasses the city’s historic center. Well connected with buses, subways, and other trolleys, this is a good way to escape inclement weather and give tired kids a rest. Of course, the ride itself is a treat for many kids, especially with trolleys being so rare in the US. There is also a special program for young streetcar passengers to listen to as they cruise along the Ring Road, coupled with an LCD screen that explains what they’re seeing.

Vienna has more than its share of museums that kids might find stuffy, but the Natural History Museum is certainly not one of them. One of the world’s most renowned natural history museums, 100,000 of its collection of 30 million objects are on display. Home to the world’s largest natural history collection for some time, the eclectic mix on display has unusual objects from around the world, from dinosaur bones to preserved animals that have long since gone extinct (such as Steller’s sea cow, the manatee’s Alaskan cousin). There is a sizable gem collection, including a topaz weighing over 250 pounds and a “bouquet” made of diamonds and other precious stones, while elsewhere you’ll find the world’s largest displayed collection of meteorites. Perhaps the museum’s most famous piece is the Venus of Willendorf, a 30,000-year old carving believed to be of a fertility goddess. The elaborate historicist building that houses the museum’s displays is worth a visit alone, with its grand staircase, frescoes, and soaring paintings. 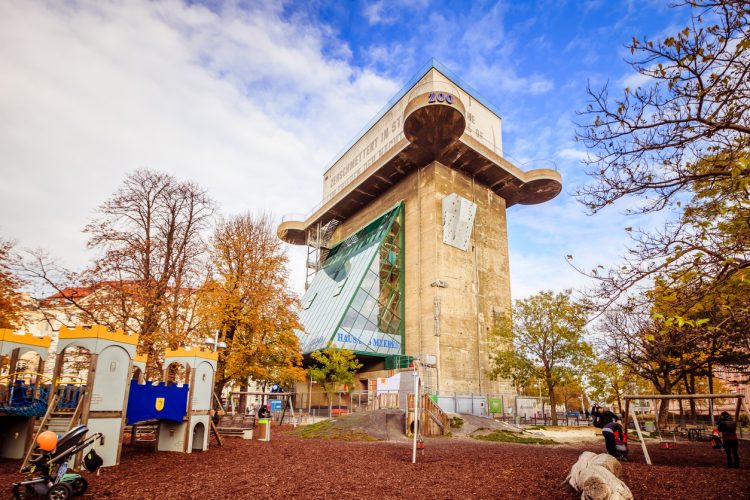 The House of the Sea

Feel free to gawk at the House of the Sea Aqua Terra Zoo (and its ungainly long title) but then be sure to enter. Located inside one of the city’s six WWII flak towers, this aquarium is located near the Mariahilferstrasse pedestrian shopping street. Vienna’s flak towers are massive concrete fortresses covered in anti-aircraft guns and featured air-raid shelters for the populace, although some (such as the aquarium’s tower) also featured radar for fire control. Too solidly-built to be demolished, this tower housed a hostel and fire station before finding its current uses. The aquarium’s highlights are its blacktip reef sharks. Using rubble from the building’s wartime damage as gravel to line the bottom of fish tanks isn’t the only creative use for the building, the exterior is also used as a climbing wall.

The ZOOM Children’s Museum has four separate supervised areas: an ocean-themed play and adventure zone for those six and under, a hands-on exhibition for kids aged 6-12, an art studio for those 3-12 years old, and an animated film studio for 8-14 year olds.  While the ocean area is meant to build motor, cognitive, and social skills, the art studio is meant to creatively teach a wide variety of artistic techniques. The hands-on exhibition focuses on questions like “what is sculpture,” “how do astronauts sleep,” and “what makes soil important?” The animated film studio, harnesses state-of-the-art technology to help kids and teens make animated films, 3D animations, and even pop songs. All of these areas have programs in English, although with a limited number of spots available, it’s best to book in advance (programs start every hour or two). There are also a series of temporary programs aimed at kids aged 8-12, such as chemistry demonstrations, but these are usually in German. With the supervised workshops and playgrounds, this is a great place to drop the kids off without having to worry.

The Chocolate Museum in the Prater is popular with kids and adults alike. The museum itself is interactive, but we recommend seeking out the workshops, which are as fun as they are tasty. You and kids as young as four can use a professional chocolate tempering machine to make your own custom chocolate bars, or make pralines and hot chocolate (kids must be at least 13 to take place in the latter workshop). The museum’s tour includes a chocolate gift and tastings, and with its chocolate sculptures and colorful exhibits, is quite a photogenic experience. 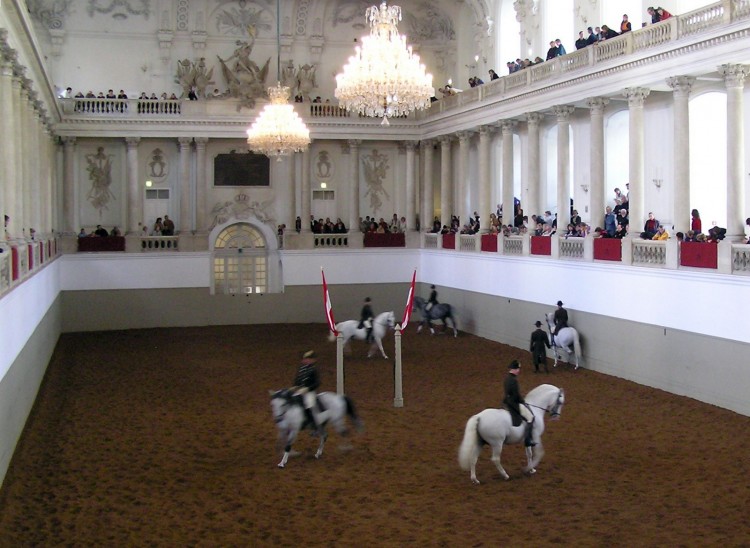 Vienna is of course home to the world’s most famous performing horses, the elite Lipizzaners of the Spanish Riding School. While tickets to performances can sell out far in advance despite their cost, the morning exercises are available almost daily, with pauses in January, July, and the first half of August. These exercise sessions last two hours, and are set to music, as horses learn the skills and build the muscles needed for their grand performances. As there are no advance ticket sales (you have to buy tickets in person at a box office), this makes for a good last-minute option, such as on a rainy day. Naturally, there are also guided tours in the afternoons. You can find more information about the School here. 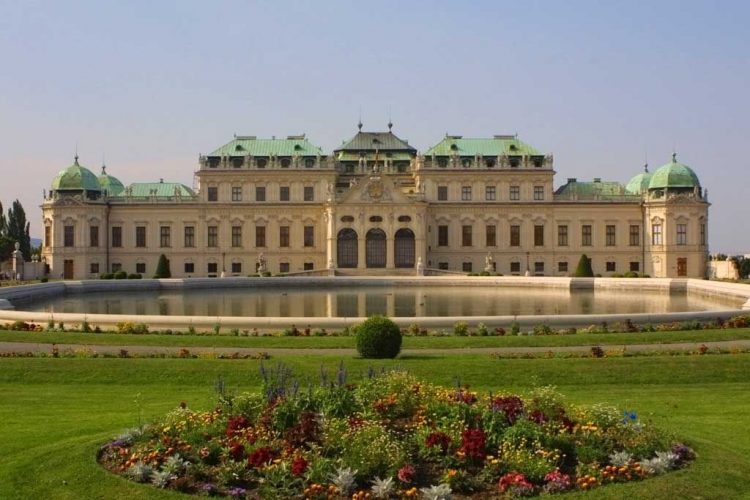 As befits such a sprawling, popular place, the Schonbrunn Palace has many activities for all ages. The palatial gardens and Baroque architecture may have helped propel the palace to fame and the must-visit lists for many a tourist, but the Schonbrunn offers plenty more. Take the kids to the palace’s own interactive children’s museum, which covers the everyday life of royal children, from how they dressed, to what they ate or played with. The museum offers a guided tour, and the chances to dress up as a prince or princess, and learn to speak in code using fans. The palace’s gardens themselves include a Baroque hedge maze with a viewing platform in the center. In addition to the maze, visit the creative Labyrinthikon Playground, which features puzzles and a variety of play structures, including a giant kaleidoscope.

The Schonbrunn even has the world’s oldest continuously operating zoo, as hinted by its Baroque architecture. Surrounding the most impressively decorated breakfast pavilion you’ll ever see, the animal enclosures were originally shaped like cut cake pieces around the pavilion. The zoo is one of the few places home to adorable giant pandas, and features a rainforest house that simulates the Amazon, an aquarium that simulates the Amazon in flood, and a polarium with Arctic fauna.

Other imperial museums connected to the Schonbrunn Palace offer activities and tours for children. The Imperial Apartments at the Hofburg has a special guided tour for children that delves into how the imperial family lived, from their hobbies to their secrets, and includes plenty of royal clothes for kids to try on. Just over the border from Bratislava, the Schlosshof has plenty to offer for children, despite its rural location, thanks to its petting zoo, interactive adventure paths, children’s theater, busy event calendar, and “Children’s and Family World,” which offers crafts, dancing, paintings, plays, dressing up, and an interactive exhibition.

The House of Music

The high-tech and impressively interactive House of Music is one of the city’s newer and more innovative museums. Guided tours for kids aged 5-10 are available on Saturday and Sunday afternoons (during the week, the tour guides are busy leading student groups). There’s an interactive stage where kids can perform with cartoon animals, computers for creating music to record onto a souvenir CD, and a musical staircase meant to teach budding young musicians to read music (a free card version is available on the museum’s website). For those of all ages, there’s a chamber recreating the sounds of the womb, an interactive activity that lets you lead a symphony with a conductor’s baton, a digital take on an 18th century game that translates names into music, a musical carpet, and much more. Naturally, there are also frequent concerts for children. 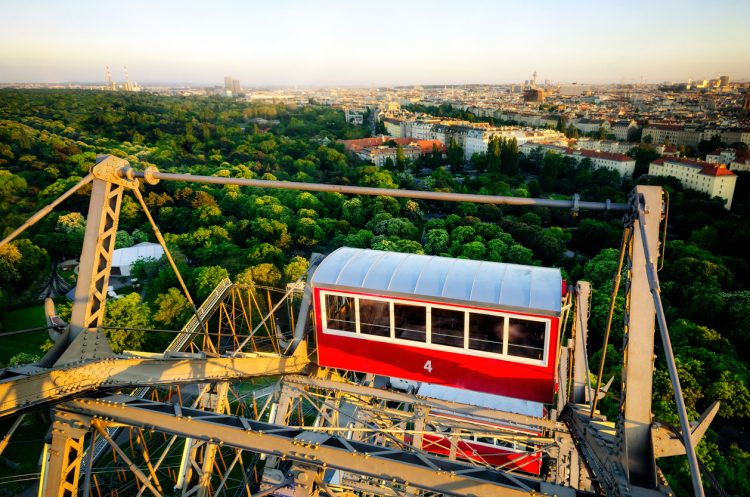 Vienna’s classic park, the Prater is always a good place for kids to get some energy out, and escape the hectic energy of the city. The iconic Ferris wheel (the world’s largest until 1985) offers great views of the city, and is the centerpiece of an amusement park with over 250 attractions. The park itself is easily accessible, close to three subway stations and a train station, in addition to the park’s own children’s railroad. If the weather turns bad, you can always duck into the local Madame Tussaud’s wax museum branch, then wander around, enjoying the park’s unique scenery once the sun returns. You can find more information on the Prater, and Vienna’s other beloved parks, here.

Vienna is chock-full of good options, no matter the weather or time of year, as the sampling above heartily testifies. If you’d like some more tips, such as good bilingual bowling alleys, or restaurants popular with kids, our local staff are more than happy to offer some additional options, to help you make the most of the city.