One of the most remarkable sights in Vienna isn’t actually in the city center. St. Stephen’s Cathedral is majestic and the Sachertorte is delectable, and you should certainly experience both while you’re in the city. But visiting Vienna’s Schonbrunn Palace, a short ride out of central Vienna, is something you won’t want to miss.

This beautiful UNESCO-listed palace, complete with huge gardens, ornate fountains, wide green lawns and walking paths, is a lovely destination for nature lovers and history buffs alike. But besides simply strolling the grounds, you can take part in a medley of historic and cultural activities here. In order to truly appreciate the property, you should know a little more about it. The name Schonbrunn means “beautiful spring” in German, and refers to the artesian well that once served the royalty living here. While these days you won’t be drinking from the spring, you can still appreciate the serene beauty of this unique destination and easily imagine how marvellous it was during its heyday. 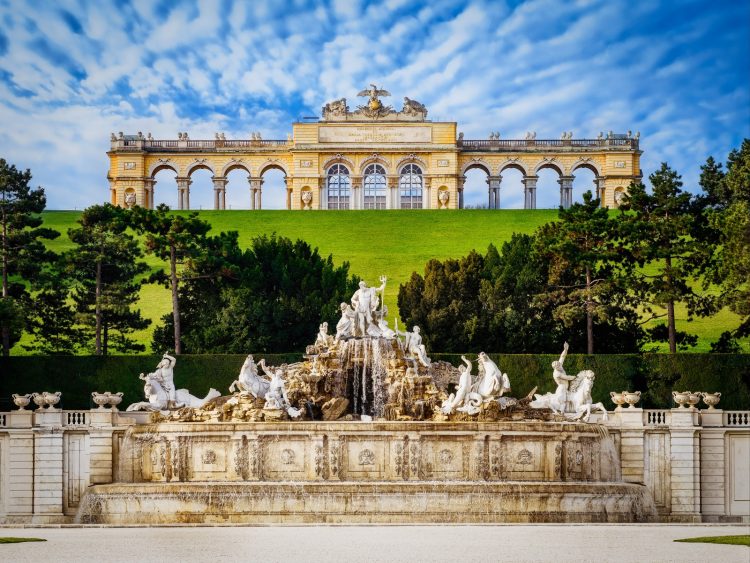 The history of Schonbrunn goes all the way back to the 16th century, when the Holy Roman Emperor Maximilian II bought the land and the mansion on it, and converted it into a hunting ground stocked with a bestiary of animals and exotic birds. The area was used as the royal hunting grounds for about 100 years, and the royal family lived in the mansion when they visited. It wasn’t until the mid-17th century that this original building was added to and Schonbrunn started to take the shape and size it has today. Finally, it was Maria Theresa who drastically remodelled the palace after receiving it as a wedding gift in 1740. Later, Franz I ordered the facade to be redecorated in a neoclassical style, which is what we see today.

Over the years, Schonbrunn has seen more than its fair share of historical events. Emperor Franz Josef was born and also died here. After World War I, the palace officially became a museum. But that didn’t mean it was obsolete. Allied forces were stationed here during World War II, and throughout the 20th century Schonbrunn was the site of numerous important political meetings, including one between Kennedy and Khrushchev in 1961.

The palace and the grounds received UNESCO status in 1996, and both remain impeccably looked after. But the history and design of the building are only part of the allure that make Schonbrunn a must-see sight in Vienna. It also has a rich cultural calendar throughout the year.

What to do there today

Today, Schonbrunn is a one of the centerpieces of Austrian history and culture. To start with, you’ll certainly want to take one of the guided tours, which is the best way to get to know the history of the palace and all the different things to do here. It’s also the only way to get inside to see the opulence of the palace interiors. But even beyond the different areas of the palace, each of which has its own special connection to history, there are numerous activities to take part in and other things to see.

Many festivals and special events take place at Schonbrunn throughout the year, from classical music concerts to art exhibitions and even things like the Vienna Citrus Festival. You can check out the palace’s official website to see what’s happening during your visit.

But even if you aren’t interested in any of the numerous cultural activities here, Schonbrunn is a wonderful place to walk around amid well-tended trees and shrubs enjoying the stunning views and regal atmosphere. Whether you’re bringing a picnic lunch or just strolling around the grounds, a visit to this palace is the best way to get in touch with the incredible history of this royal destination.

Planning a trip to Vienna? We’d love to put together a Vienna travel package just for you. Get in touch to find out more!