The epitome of Estonian culture and zenith of the national calendar, Estonia’s Song Festival is held in Tallinn in early July every five years, attracting crowds of 100,000. Over the course of two concerts, 35,000 singers (from over 1,000 choirs) perform. Hearing them all sing at once is a truly memorable and moving experience!

The Song Festival can overshadow its sister, the Dance Festival held on the same dates. This event brings together over 10,000 performers, who demonstrate folk dances en masse, creating shapes and patterns across the grounds of a large stadium. Both come together on a massive six-hour parade, in which nearly 50,000 march towards the Song Festival Grounds to celebrate the first concert. Estonia may be larger than Switzerland or the Netherlands, but the country often feels like the world’s smallest town, especially during the parade, a cheerful must-see, as marchers are greeted by family and friends. With 1/10 of the country’s entire population gathered in one place, the festival plays the role of a massive impromptu reunion, and stumbling across old classmates and neighbors while heading to the refreshment stands is the norm.

The Song Festival played a key role in Estonia’s 19th century national awakening and its return to independence from Soviet occupation, making it a key part of the national history that can be experienced today. In 1988, increasingly brave demonstrators spontaneously began to sing forbidden patriotic and traditional songs. This culminated in massive crowds marching from an officially sanctioned festival in Tallinn’s center to the Song Festival Grounds to sing tunes that still came with the risk of a prison sentence. This, and other cases of singing forbidden songs at large gatherings, helped the fledgling Estonian independence movement demonstrate and gain further support from the masses, and accelerated the Soviet breakup.

The Youth Dance Festival held two years ago saw a performance cancelled due to a storm, but the dancers held their own impromptu performance in the city’s main square. Despite dismal forecasts this year, the Song Festival was dry, and even clouds were rare. For the first time, officials cut off ticket sales to the second concert, as the audience began to swell past 100,000, which meant that even the public viewing areas were busy. Fortunately, Song Festival tickets go on sale half a year beforehand, making them easy to obtain for those who plan ahead (although the Dance Festival can sell out as early as February). Otherwise, the festivals went off without a hitch, and even the president herself (and some bodyguards) was spotted marching with her old choir.

If you visit and would like to take a break from the parade, we recommend making a detour a bit down the coast to the Maarjamäe Palace, and the nearby memorials. This recently renovated former manor house often hosted Peter the Great. It now contains a film museum, a room completely covered in a colorful mural showing the Soviet Union’s bright future (finished shortly after its breakup), a history museum and an exhibition of Soviet-era statues of Lenin, Marx, Stalin, and other leading communists. This museum is as creative and quirky as the country’s other modern museums. 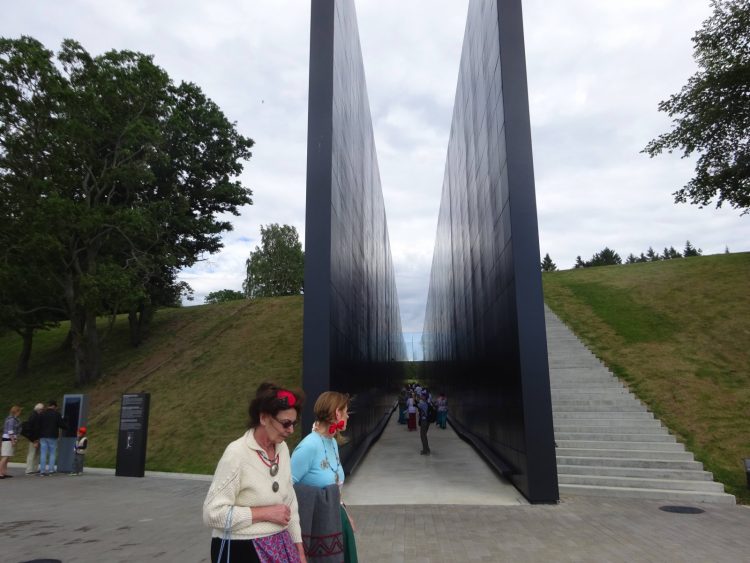 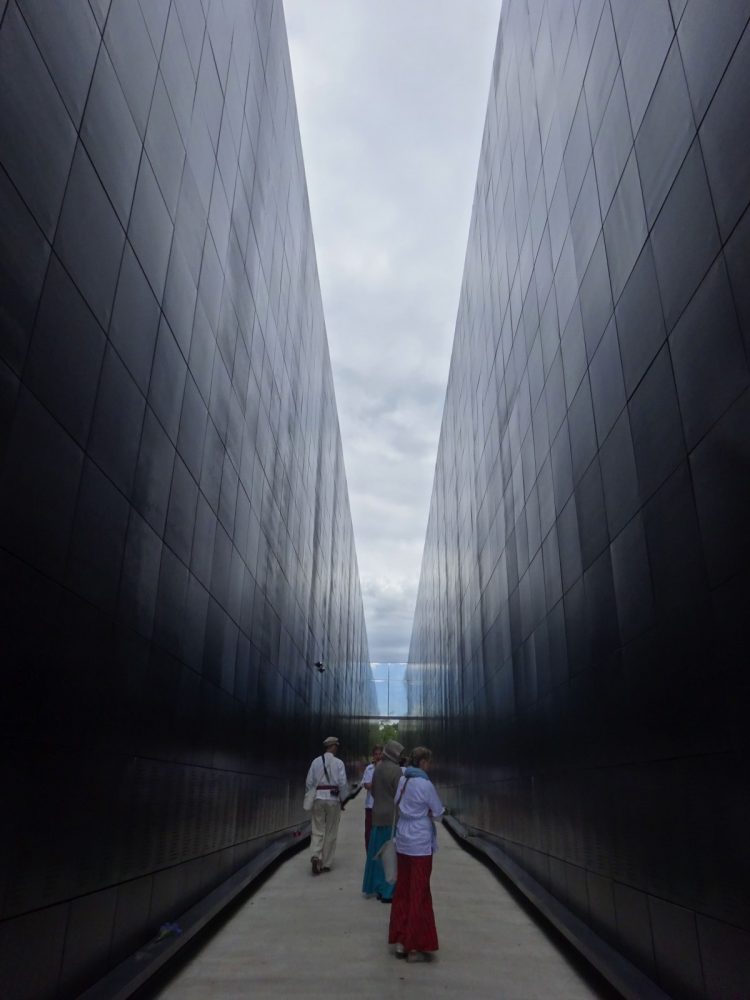 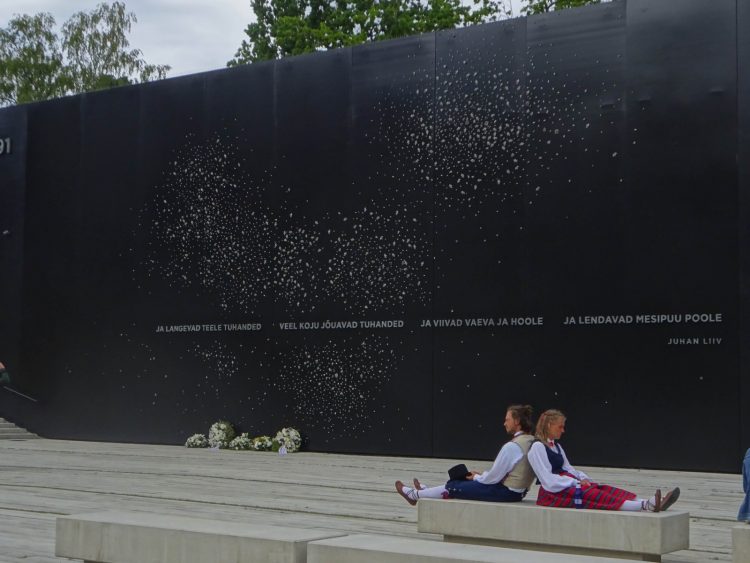 A short distance from the palace is a series of memorials, offering several different takes on events from the 1940s. Within sight of each other are a Soviet memorial to soldiers killed in the city’s capture from Nazi forces, a graveyard for Germans and Estonians killed resisting the Red Army, and an impressive new memorial to the tens of thousands of Estonians killed or deported during Soviet occupations. When viewed from the right angle, with blue skies, the newest memorial subtly turns into a giant Estonian flag. 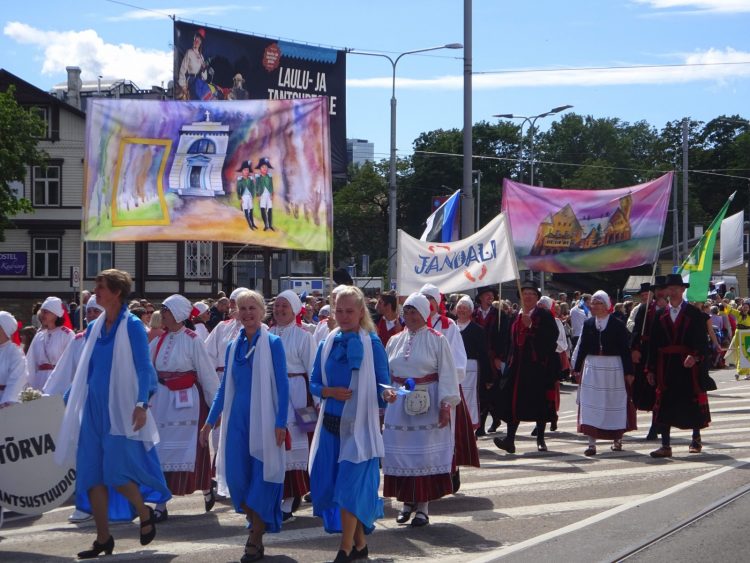 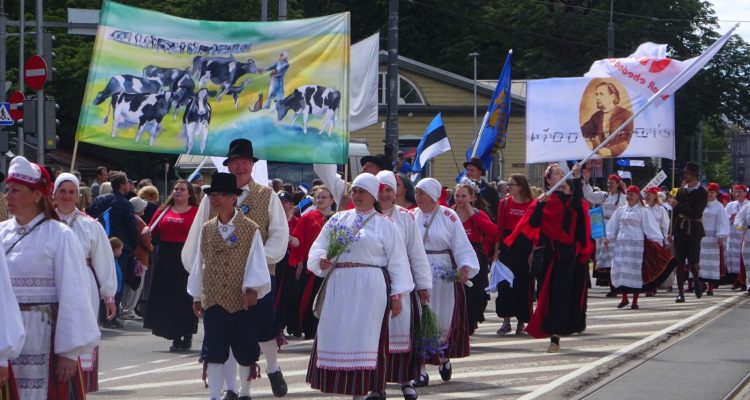 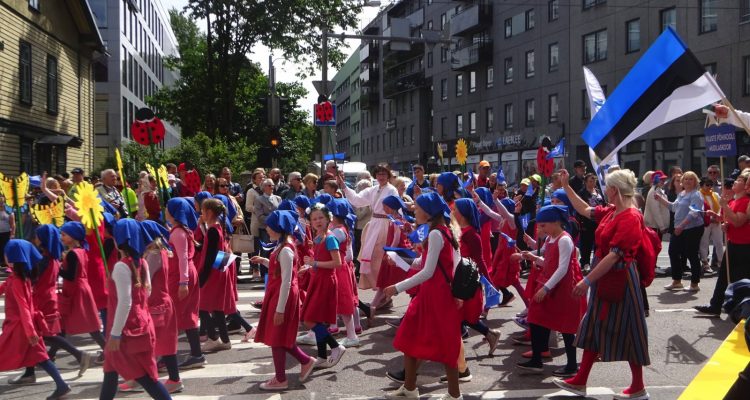 For more information on the Estonian Song Festival, and its similarly mammoth counterparts in Latvia and Lithuania, see this recent blog post.