JayWay Travel Blog » Germany » Oberammergau: Over 300 Years of Passion in the Bavarian Alps

Oberammergau is a sleepy Alpine village nestled in the foothills of the Bavarian Alps; with a population of just over 5,000 it can seem fairly insignificant for anyone just passing through. But once every 10 years, the village becomes one of the most visited in the state of Bavaria, welcoming around half a million tourists. Visitors from far and wide flock to the picturesque village to watch a theater production of the end of Jesus Christ’s life, also known as the Passion Play. 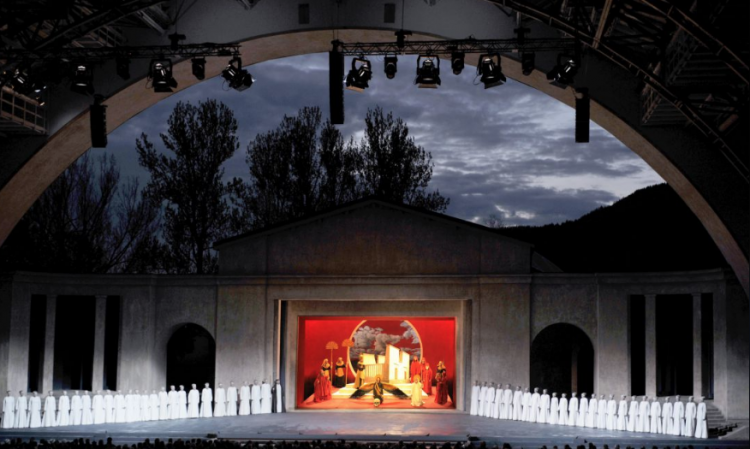 A play from a plague

This is no ordinary Passion Play; its history dates all the way back to 1633. As the 30 Years’ War ripped through the region, so too did the dreaded bubonic plague. In 1633 a local man returned to his hometown for Christmas, bringing with him not just Christmas presents for his family, but also a nasty case of the plague! The Catholic villagers, terrified by the prospect of an epidemic, made a pledge to God that if He spared them from the plague, then every 10 years the village would put on a performance of the “Suffering, Death and Resurrection of Our Lord Jesus Christ.” Once the vow had been made, the villagers who were suffering from plague miraculously recovered and the Black Death never darkened the doors of Oberammergau again. True to their word, the villagers performed the first Passion Play in 1634 and it has been performed every 10 years in a year ending with a zero ever since.

What makes this play so special, besides its incredible history, is that today the traditions from 1634 are still being kept alive. Rather than turning the play into a big commercial venture, the production has remained local and only inhabitants who have resided in the town for at least 20 years are allowed to perform. Exactly a year before the performances begin, some 2,000 villagers involved in the production agree to stop cutting their hair and the men let their beards grow. For a whole year, villagers dedicate every weekend and vacation to rehearsals, and those not involved in the performance begin to prepare the town for a whirlwind of visitors

The play is performed in German but international audience members are given booklets with translations. For those already familiar with the story, it is very easy to follow and of course the beautiful music needs no translation. 102 Passion Plays will be performed between May and October of 2020; the play begins at 2:30 pm and ends at 10:30 pm, with a three-hour intermission so the audience can grab some traditional Bavarian food and beer and soak up the atmosphere in between the two acts.

The town itself is still a draw for tourists whatever the year, due to its history and the beautiful frescoes found on many of the buildings in the town. These outdoor paintings were once a way for villagers to demonstrate their wealth and status in the town. Today they serve as a reminder of the town’s history and Alpine traditions, and of course they make for great photo opportunities! Oberammergau is also famous for its woodcarving, so if you’re looking for the perfect place for a traditional cuckoo clock or Christmas nutcracker then look no further than Oberammergau!

In the heart of Bavaria

The town is well situated, being just a stone’s throw from Bavaria’s most famous ski resort, Garmisch-Partenkirchen, and around two hours by car from both Munich and Salzburg. It is possible to spend half a day appreciating this unique village in the foothills of the Alps and the other half on top of Germany’s highest peak, the Zugspitze; the ride on the cable car alone is worth it! This cable car opened in 2017 and takes 120 passengers at a time to the 9,718 foot-high peek in a matter of minutes in a feat of spectacular German engineering. And if all that’s not enough, from Oberammergau, it is possible to visit the Bavaria of the Fairytale King, Ludwig II, by taking a trip to his famous Neuschwanstein, Linderhof and Herrenchiemsee castles, all located between one and two hours away by car!

Oberammergau is truly a jewel of Catholic Bavaria and a must-see for visitors to the region. The Passion Play itself is a once-in-a-lifetime opportunity for tourists in Bavaria and not to be missed in 2020!

Tickets for the Passion Play 2020 go on sale in 2019. Prices start at $50 and sell out fast! Get in touch soon if you want to include this wonderful spectacle on your 2020 JayWay Germany and Central Europe trip!