Another Side of Croatia: Trakoscan and Varazdin

JayWay Travel Blog » Zagreb » Another Side of Croatia: Trakoscan and Varazdin

Just a short drive of less than an hour north of Zagreb in the Zagorje region of the country you’ll find two picturesque and decidedly un-Croatian looking sights, particularly if you started in the south of the country. Both of these places speak more to the history of inland Croatia, quite different to the Roman, Venetian and Ragusan history of the coast. Get off the beaten path of the coastal cities and explore an area of Croatia where few tourists ever reach.

Perched on a hilltop that has long been the site of a fortification of some kind, Trakoscan was first mentioned in records in 1334. Various noble families owned the castle until it became the property of the state property in the mid 16th century and was then subsequently given to the Draskovic family a couple of decades later. The family owned it continually until late WWII when they were forced to emigrate to Austria – being part of a rich family in a socialist country was generally bad for one’s health. At that time the castle became the property of the state.

The present form of the castle was mostly the work of Juraj V Draskovic who reimagined it from a defensive fortress into a residential manor house, remodelling it in Neo-Gothic style in the mid 1800s. At the same time the surrounding grounds were converted to Romanticist pleasure grounds in the style of an English park, along with the building of a dam and the creation of the lake that you see today. The castle was turned into a museum in 1953 and the permanent exhibitions tell the story of the castle through various collections of artefacts as well as a large collection of paintings. You can take a self-guided tour with an audioguide for a small fee. Tours with a museum guide can be arranged too. If museums aren’t your thing then you could always rent a paddle-boat and go for a tour of the lake. 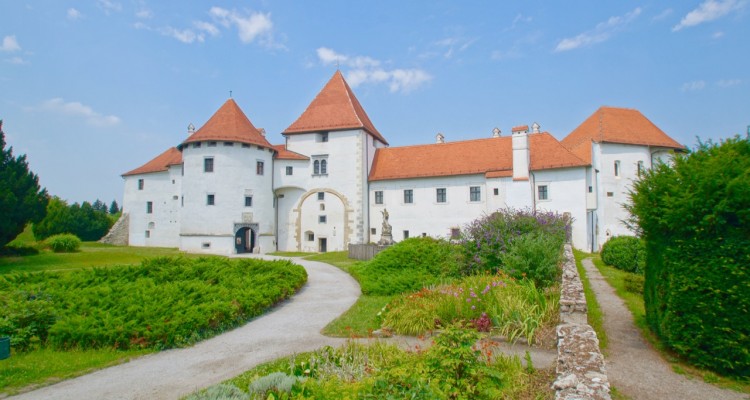 If you’ve spent time in Dubrovnik, Split, Trogir or Zadar you’d be forgiven that all Croatian cities are medieva or even Roman looking and made of limestone. The city of Varazdin is quite the contrast and has been called Croatia’s ‘Little Vienna’ because of the wealth of baroque buildings that make up the old town. It owes much of this architectural wealth to the events of the mid-18th century. The Croatian leader of the time, with the blessing of the Habsburg Empress Marie-Theresa chose Varazdin as his capital, which sparked a building boom. Varazdin’s time as the seat of power was short-lived however and much of the town was destroyed by a fire in 1776.

The government might have moved to Zagreb but local landowners and merchants continued to bring in the best architects, painters and craftsmen to build mansions and palaces. Adjacent to the streets and squares lined with pastel-coloured buildings that instantly bring to mind other Central European towns and cities is the Old Town keep, the main tourist attraction. This medieval castle now houses the city museum. Oddly for a city of such attractiveness tourists by and large don’t venture so far inland, to the very north of the Croatia so you’ll have the unusual experience of being one of the few people walking around taking photos. Given its location and the fact that there was a large Yugoslav army base nearby you might expect that the city would have been damaged in the Croatian War of Independence but thankfully the fighting around the town only lasted a few days with few casualties and minimal damage to property. The base surrendered quickly and ended up providing a significant cache of weapons to the Croatian forces. Recent years have seen a resurgent arts scene in Varazdin, as covered by the New York Times earlier this year.

Where to eat: we had a filling and refreshingly inexpensive lunch at Verglec restaurant on Silvija Strahimira Kranjčevića street

How to visit Trakoscan and Varazdin

You can easily self-drive to Trakoscan and Varazdin, it takes a little under an hour, mostly by highway, from Zagreb. We offer a private day trip that covers both sights. We also offer a more unusual kind of experience on our Meet the Locals in Northern Croatia day, which includes Varazdin among other places in the Zagorje area, but not Trakoscan.