When the weather gets wet and chilly, there’s always plenty to do. We asked our local staff for to recommend enjoyable places to wait out the weather, or spend a chilled, or chilly, afternoon. You can find their favorites below. 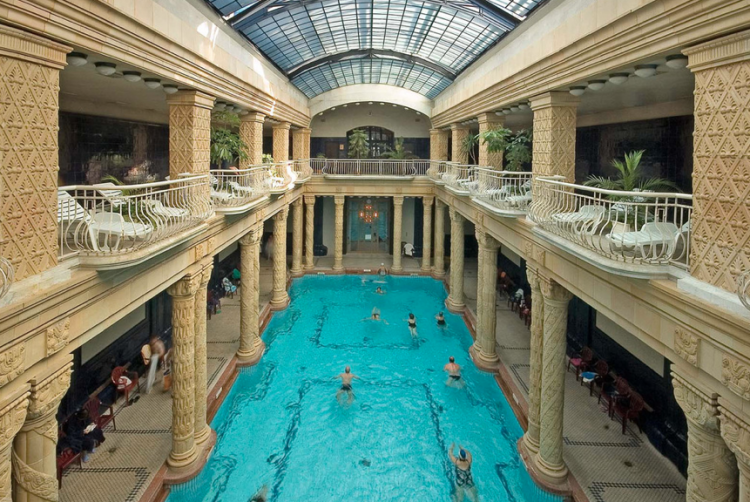 In Budapest, the classic way to spend a day with poor weather is to warm up and relax in the city’s famed thermal baths, all said to have healing properties. You can find more Budapest spas information here, but we decided to list places to duck into near the best baths for a break. The food tends not to be so good (except at Rudas), so we recommend having a plan to get food before or after visiting a bath.

The most popular options are the grand Gellert (located at the base of Gellert Hill with its Citadel, just across the river from the Great Market Hall), and Szechenyi, in the City Park near Heroes’ Square. Sprawling Gellert has impressive Art Nouveau architecture, although it was built on the grounds of much older bathhouses. Naturally, the Grand Market Hall is a must-see, but if you’ve already spent time there, you can visit Hadik Cafe, or find great souvenirs and the contemporary New Budapest Gallery within Balna (“Whale,”) a market hall composed of two older halls connected by a large glassed-in area shaped like the eponymous animal. The Neo-Baroque Szechenyi is one of Europe’s largest spa complexes. If you’re visiting Szechenyi, we recommend visiting the famous Gundel and Verosliget cafes, or the Museum of Fine Arts, all located by Heroes Square (although the museum is closed Mondays). 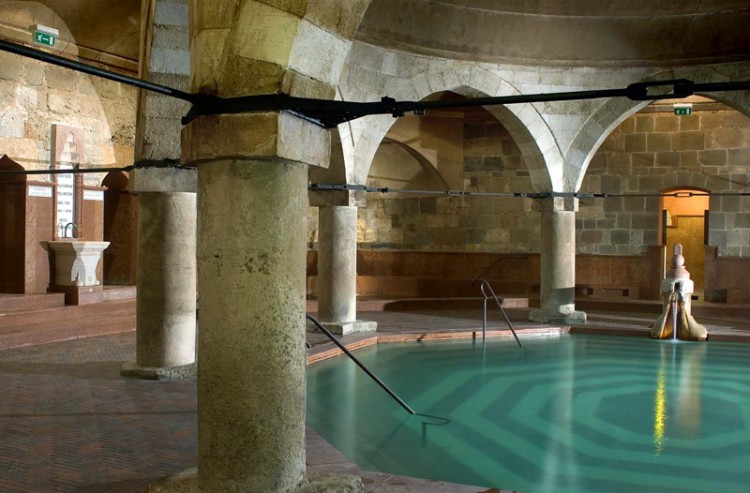 Other places popular with locals include Rudas, Veli Bej, and Lukacs. All five options above are historic, with Rudas and Veli Bej among the city’s oldest baths, built in the 16th century during Ottoman rule (Rudas dates back to 1550, and has been a setting for Hollywood films, such as Red Heat). Veli Bej and Lukacs are very close to each other, beneath Gellert Hill. There are few good dining options in the vicinity, save for Tommy di Napoli (an Italian restaurant), but Buda Castle is easily reachable. Rudas’ rooftop restaurant is worth a visit, and Buda Castle is only two streetcar stops away.

Taking streetcars can also be a good way to visit the city’s artsy and historical sites, while staying dry and enjoying views of the river. We recommend taking the 2 or 2A streetcar lines on the Pest side, and the 17 or 19 on the Buda side. At the Liberty Bridge, you can take the 47 or 49 to cut across the river, and the 4, 5, and 6 will take you across Margaret Bridge (with stops at Margaret Island if the weather improves). 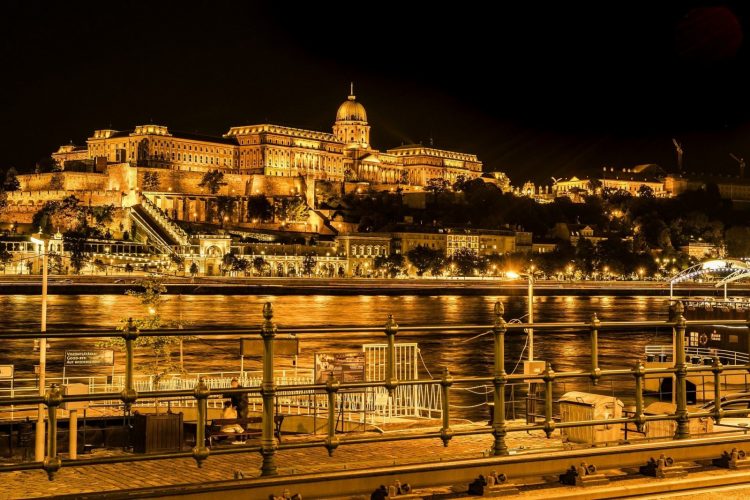 On the city’s Buda side, visit Buda Castle by disembarking at Adam Clark Square, the large traffic circle next to the Chain Bridge. From the square, you can take the funicular or a small electric bus to Buda Castle. If the weather turns decent, walk up the Castle Garden Bazaar (an ornamental garden and cultural area that has never hosted shops, despite the name), to the Hungarian National Gallery. The Gallery combines Hungarian paintings with temporary exhibitions that usually showcase famous painters like Picasso.

On the Pest side, you can find most of the city’s attractions, such as the Hungarian parliament building and the wonderful Szamos Cafe across the street (the flagship store for the eponymous confectionary brand, which also offers more hearty fare alongside a museum, gift shop, and confectionary. Elsewhere along the streetcar line, the Vigado concert hall has a good onsite restaurant, in addition to its generally more traditional concerts. Further south, the stunning new MUPA (Palace of Arts) and LUMU (Ludwig Museum) also make great stops. The former is a modern concert hall with a memorable interior, while the latter is a contemporary art museum with pieces by artists from Yoko Ono to Picasso, alongside good buffet and a la carte dining. 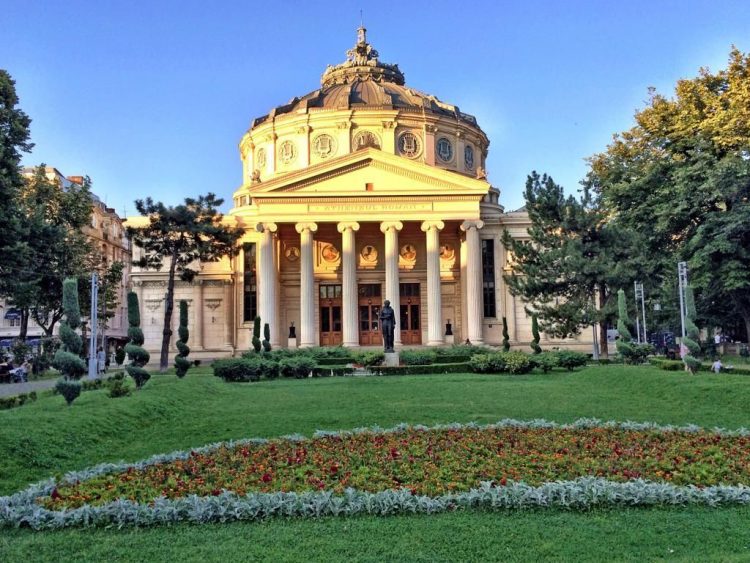 In the city center, there are plenty of cultural treasures to keep you busy until the sun returns. The Romanian Athenaeum is an ornate 19th century concert hall home to a philharmonic and an international music festival both named for George Enescu, a beloved child prodigy, composer, musician, teacher, and conductor. Beneath the dome, the circular main hall is lined with a massive fresco illustrating Romania’s history since its conquest by the Roman emperor Trajan.

The seemingly endless National Museum of Art of Romania can easily fill entire days if you let it. Located in the former Royal Palace, the museum features the Romanian royal family’s collection, which skews towards works by the Old Masters, plus some Impressionism. Otherwise, the museum focuses on Romanian art since Medieval times, although the galleries themselves are works of art.

For something even older, head to the Museum of Romanian History. This institution has treasures from more modern times, like stamps and the Romanian Crown Jewels, but excels in ancient works made entirely of gold. These include the Gothic works of the Pietroasele Treasure, and bracelets (often shaped like snakes) worn by the Dacians, the mysterious ancient ancestors of the Romanians.

Located near Bucharest’s airport, Therme is a sprawling glass-enclosed wonder, with nine pools, 16 water slides (stretching over a mile in total), 10 saunas, and the country’s largest botanical garden, with over 800,000 plants, including 1,500 palm trees alone (forming Europe’s largest palm forest). The place even claims to have Europe’s largest “urban beach.” Whatever the weather outside, you can retreat from it at Therme, which is kept at 85 F, avoiding a truly ruinous utilities bill by heating everything with hot water from deep underground. 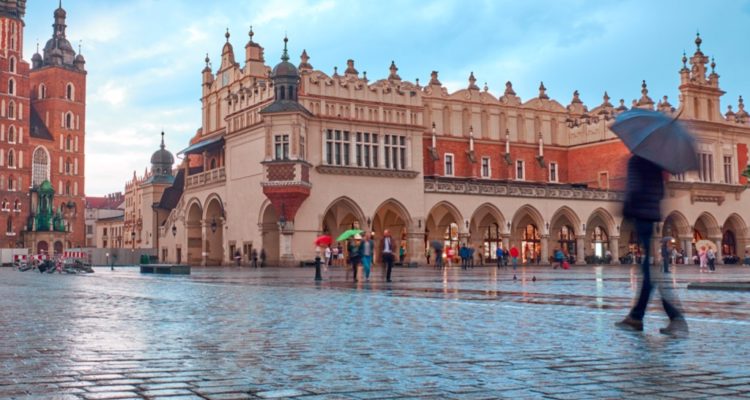 Krakow’s main attractions work well when the weather isn’t working out. If you’ve gotten tickets ahead of time (something we can provide), you can visit the salt mine in neighboring Wieliczka, or the Rynek Underground museum, beneath the city’s main square. Located beneath the Cloth Hall in Krakow’s main square, the Rynek Underground is another great museum to visit. You’ll experience the history of Krakow with many innovative exhibitions showing how excavations of the market square display the city’s history (including a graveyard with a body buried a particular way to prevent it from returning as a vampire!)

You can easily fill a day at the city’s grandest museums, such as the Wawel Castle, stuffed with everything from Italian Renaissance paintings to objects from the Crown Treasury to Europe’s largest collection of Ottoman tents, elaborately decorated silken “movable palaces” captured at the pivotal Battle of Vienna. The museum also has large collections of works in gold and silver, and monumental 16th century tapestries which were looted by Russians in the 18th century, recovered as the result of a peace treaty in 1922, then evacuated to Canada just ahead of Soviet and Nazi armies in 1939, and held for safekeeping until 1961.

Krakow is also home to the main branch of the National Museum, which has nearly 800,000 objects in its collection. The museum’s works are scattered across 11 locations in Krakow. The Main Building focuses on Polish paintings, displaying nearly 500 works from the past 150 years. The Sukiennice Museum in the Cloth Hall at the center of the Rynek Square is devoted to 19th century Polish painting and sculpture. The Czartoryski Museum is a must-see thanks to its paintings by old masters, with da Vinci’s “Lady with an Ermine” at its core. While many of the museum’s treasures were looted by Nazi occupiers (Vienna’s Kunsthistorisches Museum refuses to return the stolen works it bought during that period), plenty more masterpieces can be found at the new EUROPEUM, a 17th century granary now home to works by Lucas Cranach the Elder, Pieter Brueghel the Younger, and other masters.

If you’ve been meaning to get some shopping done beyond souvenirs, the Krakowska Galeria mall across the street from the train station (just beyond the Old Town) has 270 shops, and offers everything from a car wash to several playgrounds. We’re also happy to recommend shops and restaurants closer to your accommodations. We can also offer advice on everything from bowling alleys to places to get your laundry and other errands done.

Travel calls for flexibility, since no matter how early and carefully you plan, the weather always gets its way. With the help of our on-the-ground staff, and their local know-how, we’ll help you make the most of your time, whether you’re looking for serious museum time, a way to keep the kids busy, or to run a few errands or get a bit of down time. Even when the sun disappears, Europe’s cities never fail to provide endless options.