Exotic and tasty, if tricky to pronounce, Georgian cuisine is finally getting the credit it deserves. Hospitality-trend forecaster af&co declared Georgia’s food its 2019 “Cuisine of the Year,” and Khachapuri its “Dish of the Year,” in part because it’s so photogenic. Scroll down this page and you’ll see what we mean. Rene Redzepi, who founded Copenhagen’s Michelin-starred Noma (often declared the World’s Best Restaurant by Restaurant magazine) and helped spark the New Nordic Cuisine movement, has referred to Georgian cuisine as “one of the last great undiscovered food cultures of Europe.”

More than meat and cheese

Georgia excels at meat, but many favorite dishes are based around vegetables, and even vegans can eat comfortably. Each historical province has its own distinct dialects and culinary traditions, but the country itself is a melting pot of the many empires that have passed through, and the many inspirations that have come down the Silk Road.

One of Georgia’s most beloved traditions is the Supra, a massive feast led by a toastmaster known as the Tamada. A Tamada may give 20 or more toasts over the course of an evening. Indeed, Georgians claim to have invented the tradition of giving toasts. Even without taking part in a seemingly endless feast, food and drink make up a key part of a hospitality culture that has been described as “pathological,” as even hitchhikers can find themselves showered with food and drink.

Georgians are fond of cheese, with selections of the country’s over 250 types gracing most dishes. Georgian cheese is often briny, giving entrees complementary bite. Cheese sometimes takes center stage, such as in the case of Nadugi, fresh cheese flavored with mint, and wrapped in slices of the omnipresent salty Sulguni cheese, which is akin to mozzarella. 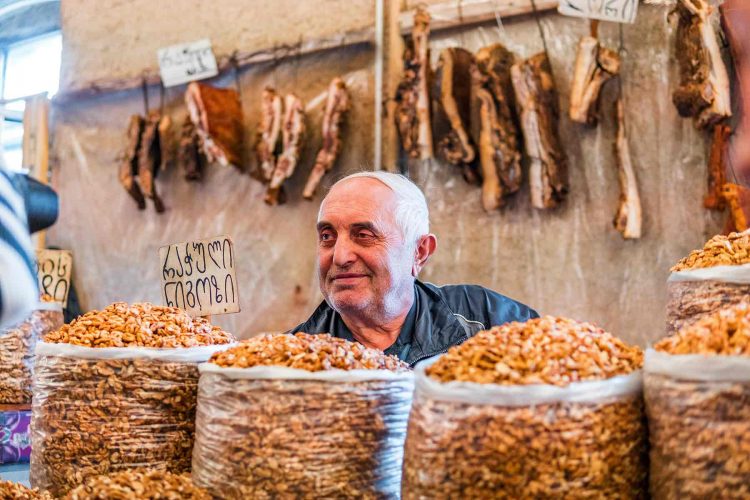 Walnuts are a staple ingredient in Georgian cuisine, their rich taste typically balanced out by something sour, like yogurt or vinegar. This can be seen in Pkhali or Mkhali, which are chopped and minced vegetables combined with various spices and herbs, as well as vinegar, onions, garlic, and pureed walnuts. Spices and herbs are important elements of Georgian dishes. Other characteristic ingredients include cilantro, tarragon, blue fenugreek, and marigold petals. Two common dips are Ajika (a spicy combination of red or green peppers, garlic, coriander, dill, salt, walnut, and blue fenugreek that resembles pesto) and Svanetian Salt, a combination of salt and spices.

Soups tend to feature meats flavored with many spices. The most famous traditional soup is Kharcho, which combines beef with rice, cherry plums, and a walnut puree. Another classic is Chakapuli, a lamb or veal stew that includes onions, tarragon, cherry plums, white wine, herbs, and garlic. A must for the chicken-obsessed, Chikhirtma involves taking apart a chicken, then reassembling it in soup form. This dish requires making chicken broth, thickening it with chicken eggs, vinegar, and lemon (some also add flour), then adding chicken meat and flavoring it with herbs. Chikhirtma makes a great hangover cure for the morning after a Supra.

Go wild for the plums

Georgian food has clear peasant roots and still features wild ingredients. One popular example is Tkemali, a sauce that is based on wild sour plums, granting it a sharp, tart taste, even with spices added. These plums are also used to make a sour version of Tklapi, fruit roll-up leather that’s usually sweet and made from apricots, grapes, or peaches (although peaches are nowhere near as popular among Caucasian Georgians as they are among American Georgians).

The most famous Georgian food is Khachapuri (the “k” is silent). It’s essentially a flatbread covered or filled with cheese (often brined Sulguni or Imeruli). The shape and filling varies greatly by region, but the most famous and photogenic form comes from Adjara, the semi-autonomous region in the southwest that is home to the glitzy beachside resort city of Batumi. Adjarili Khacapuri is shaped like a long, open boat, and topped with a raw egg and pat of butter before being served, hot from the oven. The crust can be ripped off and dipped into the hot, soft filling. Yes, it’s as calorific as it sounds. The most common type, Imeruli Khachapuri, is circular, with the cheese enclosed. Mingrelian Khachapuri akin to its Imeruli cousin, except cheese is both inside and added to the top.

Khachapuri can be hard to recognize. The version popular in Abkhazia, in the country’s northwestern corner, resembles an especially cheesy lasagna. Khabidzgina Khachapuri combines mashed potatoes and milk in addition to cheese. Other regions prepare their take on this cheesy flatbread with fillings that can include spinach, nettles, and beet leaves.

Kidney beans are easy to find, as an entree or a side. Every restaurant offers its own take on Lobio, beans that are cooked or stewed and served hot or cold in a clay pot or bowl, with coriander, garlic, onion, and omnipresent walnuts mixed in. Lobio is often eaten with Mchadi, a filling fried cornbread. It’s also easy to find Lobiani, a form of bean-filled flatbread that resembles Imeruli Khachapuri with beans instead of cheese.

Khinkali are an absolute must. These purse-shaped meat dumplings are so juicy that you have to bite into them and suck out their savory, succulent juices before eating the rest (naturally, they are served hot). Try to eat these normally and you’ll be sprayed with hot juice! The top point, where the dumpling is pinched together, is generally discarded. This demonstrates how many Khinkali have been eaten, but is also a tradition because the top is mostly dough, and so has the least taste.

Mtsvadi is the local take on the shish kebab or shashlik omnipresent across the former Russian Empire, and much of what was once the Warsaw Pact. While no country can claim this savory dish as their own, no Supra is complete without it. Roasted chicken can be found in most restaurants, whether in the form of Satsivi (cooked in a walnut sauce and saved for special occasions, like New Year’s Eve), Shkmeruli (which has a creamy milk and garlic sauce), or Bazhe (prepared with a sauce combining walnuts, garlic, and spices).

The most popular and unique sweet is Churchkhela, which resembles sausages or hand-dipped candles. Known as “Georgian Snickers,” this treat is made from nuts (usually hazelnuts or, naturally, walnuts) threaded on a string, then dipped into thick, concentrated grape juice mixed with flour, multiple times. These colorful candies are found everywhere, from devoted storefronts in Tbilisi’s Old Town, to roadside stands. During some of our countryside tours you’ll get to make Churchkela for yourself.

Time for Wine? Or is it Chacha Time?

As with toasting, Georgians claim to have invented wine. While this isn’t exactly easy to prove, Georgians are known to have fermented wine for over 8,000 years, using techniques that many still use today. Traditionally, Georgian wineries pour pressed grapes (complete with skins and stalks) into large clay jars. These “Kvevri” are set into the ground. After five to six months, the wine is ready, while the pomace remaining is further fermented into Chacha, a powerful brandy. The white wines made with traditional techniques often take an amber hue, although plenty of wines are made with modern techniques.

For something new and delicious, seek out Georgian’s unique cuisine. Georgian dishes (especially Khachapuri) are starting to appear in Western restaurants, but for the best, made with the freshest ingredients, head to the source. We can arrange a custom, private tour of Georgia, and perhaps neighboring Armenia and Azerbaijan as well. With the help of our local staff, you’ll eat at Georgia’s best restaurants and markets, while perhaps learning to cook some treats yourself.

For more information, including recipes and lovely pictures, feel free to visit posts from our friends and travel writers we have helped explore other areas of Europe, such as The Venturists and The BoHo Chica.