From blood sausage to octopus risotto, East and Central European cuisine runs the gamut, and its desserts, varied as they may be, are all worth a taste. We asked our local staff for their favorites, and struggled mightily to winnow them down enough to fit into a blog post! Here are some sweet recommendations. 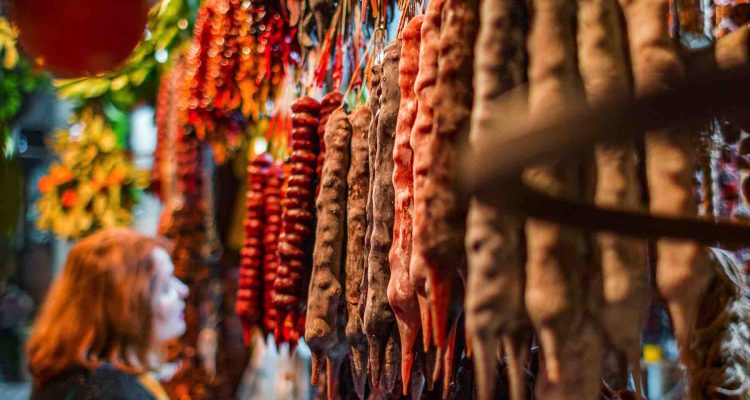 Let’s start out with a distinct delight: Churchkhela. Oft-described as “Georgian Snickers,” this popular and unique sweet resembles sausages or hand-dipped candles. Made of nuts (usually hazelnuts, or the walnuts popular in Georgian cuisine) threaded on a string, then dipped into thick, concentrated grape juice, making Churchkhela is a time-consuming process thanks to the many layers needed, but rewarding. These colorful candies are omnipresent in Georgia, from roadside stands to devoted storefronts. If you’re curious, you can make some yourselves during a tour of Georgia.

Deep in western Russia lies Tatarstan, the federal republic home to the Tatars (the Muslim descendants of steppe nomads related to the Turks, many with Mongol heritage), and the city of Kazan, known as “Russia’s third capital.” Cakcak, often written phonetically as Chak-Chak, is the most famous Tatar sweet. These stacked, deep-fried dough balls are drenched in honey, and often decorated with hazelnuts and dried fruit. Indeed, Tatar desserts in general tend to feature plenty of sugar and honey. This is typified by Talkysh Kaleve, a delicate combination of sugar, honey, and flour that melts in the mouth like cotton candy.

A bit more conventional but no less tasty, the Sachertorte is one of Vienna’s symbols. It also remains the pride and joy of the Hotel Sacher, one of the five-star hotels we proudly work with in Austria. When the personal chef of the 19th century’s greatest diplomat, Wenzel von Metternich, turned up sick on the eve of an important dinner, his 16-year old apprentice, Franz Sacher, whipped up the first Sachertorte. This sumptuous cake would bring success to the hotel and cafe that Sacher’s son would later found. This decadent delight is a dense chocolate cake topped with a thin layer of apricot jam, then covered with dark chocolate icing on the sides and top, and sometimes served with a healthy dollop of whipped cream. While found throughout Central Europe, we still recommend visiting the Hotel Sacher for the original, made with the highest quality ingredients.

Hungary inherited some of Vienna’s pastry culture, as made abundantly clear by the Dobos Torte, a showy sponge cake containing many layers of chocolate buttercream and topped with caramel. The caramel, and the coating of ground nuts on the cake’s sides, help prevent it from drying out. With its durability and shiny top, the cake was an instant hit throughout Europe, especially since buttercream was obscure at the time. Few, however, figured out the cake’s secret ingredient: cocoa butter. Like the Sachertorte, this cake can be found throughout Budapest, but we recommend seeking it out at historic cafes, such as the New York Cafe, Cafe, Gerbeud or the Central Cafe. In these cafes you can find other desserts dating back to Hapsburg times, such as the Rigo Jancsi, a cube-shaped chocolate sponge cake with chocolate and cream filling, and a thin layer of apricot jam somewhat like a Sachertorte’s. The cake is named for the Hungarian Roma violinist who married Clara Ward, an American socialite and princess (thanks to an earlier marriage) whose exploits kept gossip mills busy on either side of the Atlantic. If a cake seems heavy, try an Arany Galushka, similar to monkey bread sans cinnamon. This treat consists of dough balls rolled in melted butter, sugar, and walnuts, sprinkled with raisins, baked, and often served with custard. 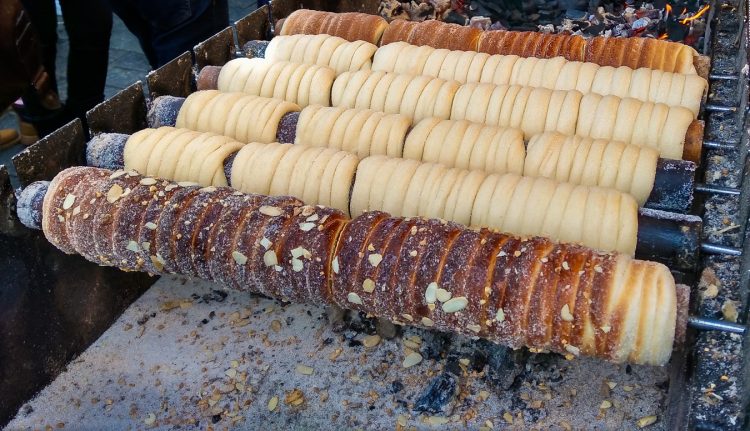 A cake of many names, the most common monikers for the dessert above are Trdelnik (in the Czech Republic) and Kurtoskalacs (in Hungary). Invented by Hungarians living in Transylvania, this spit cake spread to the Czech Republic, then had a sudden explosion of popularity in touristy areas over the past decade. Whether a centuries-old tradition or a more modern phenomenon, this chimney cake is always made of dough that is wrapped around a spit, brushed with melted butter, and rolled or topped in various ingredients such as sugar, then served hot. In recent years you might have seen it repurposed as an ice cream cone and filled with soft-serve in the tourist heart of Prague. 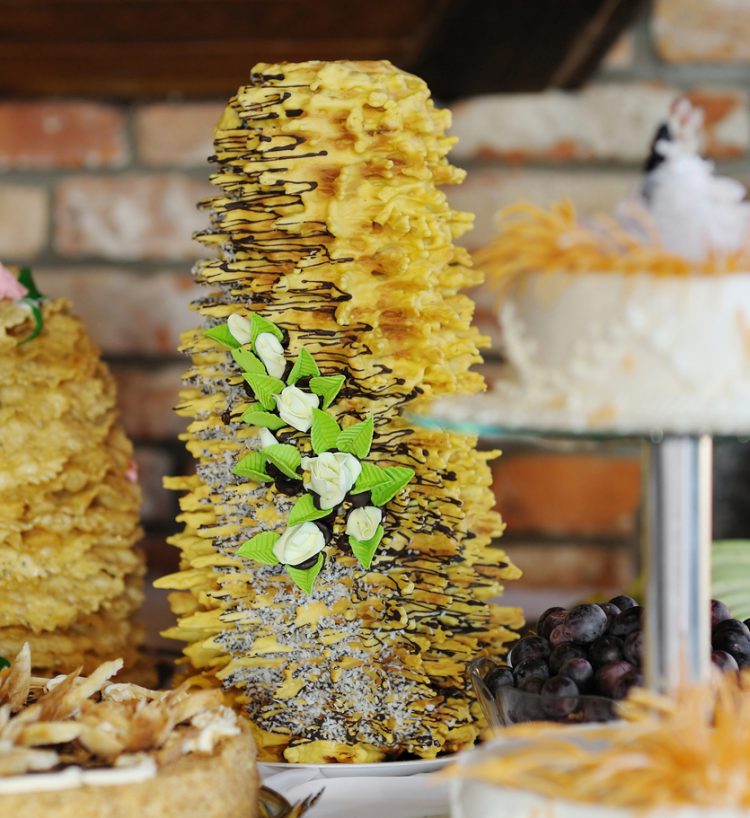 Since we’re discussing spit cakes, it would be a shame to skip the Lithuanian Sakotis, known in Poland as a Sekacz. The roots of the name, which translates to “branched tree” are clear, as this cake resembles a pine tree thanks to the many layers of dough that are meticulously painted on as the concoction rotates over an open fire or in an oven. This cake is a classic part of Lithuanian celebrations, especially Christmas or weddings, and is often served plain.

Like other Austro-Hungarian provincial capitals, Zagreb has inherited a love for decadent pastries. Chief among them is the Zagorski Strukli, similar to Slovenia’s Struklji. These dough rolls are cooked or baked, and have various types of filling, from apple to walnut to tarragon or cottage cheese. Zagreb also has its own take on the Sachertorte, the Jelacic Torta. More moist than your typical European cake, this torte has been a hit with our guests, thanks to its perfect ratio of smooth chocolate mousse with hazelnut dough, which melts in your mouth. The cake’s namesake is Count Josip Jelacic, whose statue dominates Zagreb’s main square, thanks to his reputation as a national hero who successfully negotiated for the abolishment of serfdom.

Paprenjak is another Croatian treat that’s easy to find, especially in Zadar. A biscuit made with honey and black pepper, this sweet snack resembles gingerbread, especially since it’s traditionally embossed with a pattern and comes in a variety of shapes. At fairs and around Christmas, it’s easy to find Fritule, which can look like doughnut holes, Dutch Oliebollen, or especially the Fritole popular in Venice during Carnival. These fresh dough balls are covered with powdered sugar, and often flavored with rum or citrus zest, and raisins. Another traditional seasonal dessert, especially along the coasts of Croatia and Slovenia, and neighboring parts of Italy, is the Sirnica, also known as Pinca or Pinza. These are sweet rolls, made with many eggs (then brushed with egg whites), to celebrate the end of Lent (they are traditionally baked on Easter Saturday, then eaten after being blessed). Eggs are often placed on the large cross carved into these rolls. 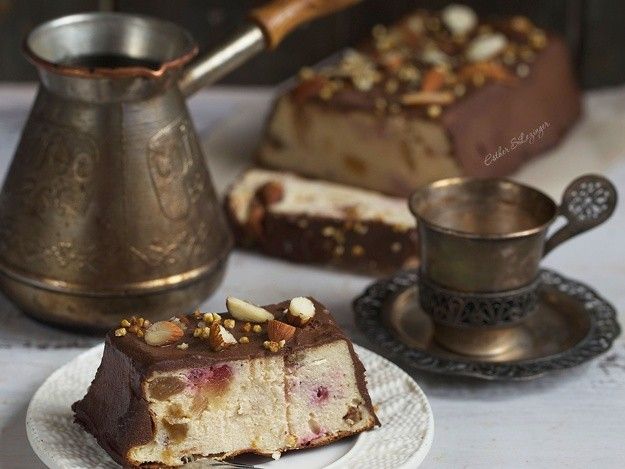 A popular sweet snack throughout Eastern Europe, but especially in Ukraine, is Syrnyk (known as a Tvorozhnik in Russia). These are pancakes made from fried Quark (a for of cheese similar to cottage cheese or curd). After being fried, they are served with a variety of sweet and savory toppings, from sour cream to jam, apple sauce, or honey. As a cosmopolitan former member of Austria-Hungary, Lviv excels at desserts, including its own take on classic apple strudel, but we recommend seeing out some Syrnyk while you’re there. 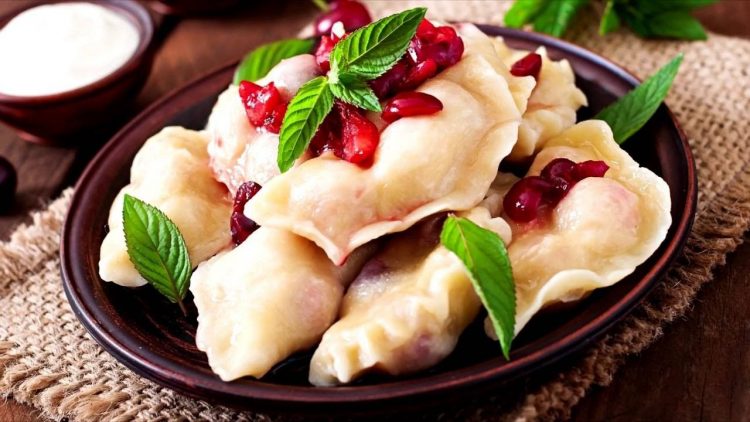 Sweet or savory, dumplings are a staple in East and Central Europe, and this is especially true in Poland and Ukraine. Poland’s Pierogi and Ukraine’s Varenyky are beloved national dishes, which helps explain why the former are so easy to find in Chicago. The sweet variety usually contain fruits or cottage cheese, and are often served with thick, sweetened sour cream. 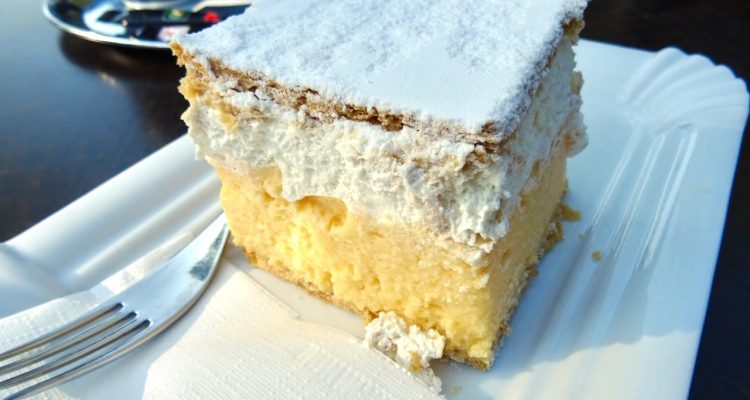 Variations on the French Mille-feuille, usually named for Napoleon, are a staple throughout Poland and the former Soviet Union. These light confections generally have three layers of puff pastry, separated by cream, while the top is glazed with icing or dusted with sugar. This cake saw a renaissance in Russia following the centennial of Napoleon’s failed invasion in 1812 (the layers were said to resemble Napoleon’s Grand Army, and the cakes were dusted with sweet “snow” then cut into the shape of Napoleon’s hat). Sales in Poland also had a recent boost thanks to Pope John Paul II’s legendary love for the cakes, known in Poland as a Napoleonka or Kremowka. Similar cakes can be found throughout the former Austro-Hungarian empire, known as a Cremeschnitte (“cream slice”) in German-speaking lands, and similar names elsewhere. Pictured above is a ‘kremšnita’, classically enjoyed at Slovenia’s Lake Bled. 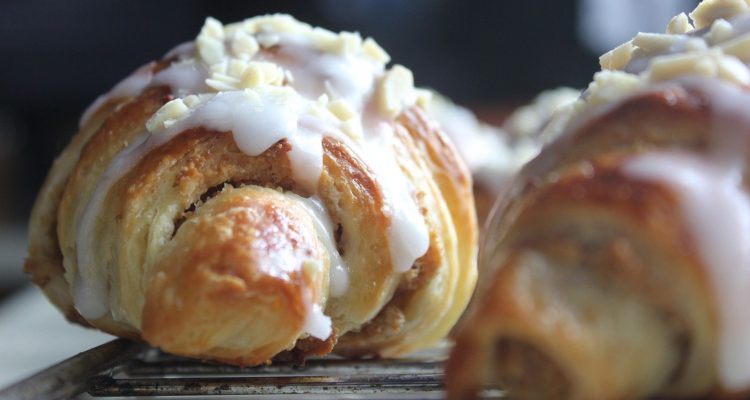 If you’re in Poland, be sure to seek out a St. Martin’s Croissant, which is served as part of the walking tour we offer there. This croissant is folded 81 times, with a paste composed of poppy seeds, nuts, raisins, almonds, sugar, and butter, inserted between the folds. The whole thing is naturally covered with icing, and still more nuts and sugar!

Despite a common ancestry dating back several thousand years ago, the Estonians and Hungarians share very little in common. There is one delightful exception: a snack composed of curd covered in chocolate, known as Turo Rudi in Hungary or Kohuke in Estonia. The curd used is closer to German Quark than to the cheese curds so beloved in Wisconsin. These sweet, tiny snacks are always a hit with visitors, whether plain, or with various fruit fillings. When in Hungary, seek out the original, which are distinguished by their red polka dots. The Hungarian take has more of a sweet-and-sour taste, and uses a form of curd a bit closer to cottage cheese than its Estonian counterpart.

Whether you’re looking for a quick snack, or a sweet feast, Central and Eastern Europe’s restaurants, cafes, and street vendors have you covered. When you travel with us, you’ll receive access to our Guest Page, with helpful info ranging from tipping advice, to where to find the best cakes and candies. You’ll also meet and stay in contact with our local staff, who are happy to help you find their favorite cafes. Travel with us, and you’ll be sure to indulge your sweet tooth.