Croatian consensus on how, when, and what to eat for an appetizer is akin to arguments about who will win each year’s Super Bowl/World Series/NBA Finals; opinions and emotions vary. Should I eat my sir i vrhnje with sausages, bacon, sliced onions, or tomatoes? Is there a need for a main dish if you are being presented with a gargantuan plate of buzara for starters? Can you truly say that soup is an appetizer? These deeply philosophical questions have been steadfast companions of Croatian dinner tables since prehistoric times. Rumor has it that cave drawings in Krapina depict the height of an emotional confrontation over the correct timing to eat olive spreads (okay, maybe this is a slight exaggeration).

Simple top 10 lists are helpful, but they won’t give you the insight required to make decisions with delicious consequences. Instead, we have broken Croatian appetizers down into two main categories; cold or hot.

Cold cuts of all kinds

Probably the most common of all Croatian appetizers are cold cuts. Depending on which part of the country you visit, you will come across regional variations. The most popular cold cuts are prosciutto, pancetta, spiced sausages, and various cuts of ham. There will almost certainly be a selection of hard and soft cheeses, many locally made, from cow, sheep and goat milk. The award-winning Pag cheese, from the island of the same name, will almost certainly feature. These cold cuts and cheeses are enjoyed with accompaniments such as onion jams (better than it sounds!), fruit jams, and ajvar spread, a red pepper relish. Even a simple sir i vrhnje (a combination of fresh cottage cheese and sour cream) is a delicacy!

In north-east Croatia, a specialty of the Slavonia region is kulen. Although considered a cured or flavored sausage, kulen doesn’t have a typical sausage shape. One might imagine it is a child’s handmade football until that first cut reveals the paprika-inspired deep red color. Only the best pigs are drafted for this special meal, having a certain weight and age, along with an important and unique diet. Producers choose only free-range pigs that roam around Slavonian forests and feed, among other things, on acorns from Slavonian oak. As mentioned red paprika gives the specific color, garlic is added for taste and a secret process gives a smoky flavor which makes it even more special. Kulen made in Slavonia has been awarded Protected Geographical Indication by the Food and Agriculture Organization of the UN. This is especially important for the producers as it protects their reputation and ensures that customers know they are buying genuine kulen. However, you don’t necessarily have to go all the way east to try some kulen. Many restaurants around Croatia have quality kulen on their menu.

In Dalmatia, you will find premium dry-cured ham, which locals call pršut. It is made from the hind leg of a pig, which is salted with sea salt, smoked, and dried in the cold bura wind. In the end, it is left to mature for at least 12 months. We don’t dispute the fact that prosciutto originated in Italy, however, Dalmatians perfected their own way of making it. Dalmatian prosciutto, unlike Italian, is wood-smoked. It has a unique smoky aroma, a mild salty flavor, and it melts in the mouth.

However, cold platters from the coastal regions tend to include locally caught seafood; oysters, tuna tartar, octopus salad, marinated anchovies, marinated shrimp, fish pâté, etc. Also, over the last few years, it has become more and more common to order a variety of locally sourced and produced olive oils. They can be used as a dip by adding a sprinkling of salt, a pinch of pepper, or a handful/smattering of herbs.

Uštipci – the side dish to many appetizers

Croatians also like to mix the hot and cold and one popular accompaniment is uštipci, or fried dough. This can be found in all Balkan countries but all with equally difficult to pronounce names! You might know them from Italy’s Emilia-Romagna region as gnocco fritto. They go very well with cream cheese, sour cream and, personally, I like to eat them with prosciutto, as the fatty parts melt on the warm dough and the taste is delicious. In northern parts of Croatia, they are called poderane gaće, or the direct translation “ripped pants.”

Order them all and consider it tapas!

While you may be inclined to think that each of these dishes has the unmistakable taste, look and feel of an appetizer, ask yourself one question. Is it worth ordering a main course if you can instead decide to create your very own tapas menu consisting of every starter we listed above?

The list of cold appetizers may seem big, but we haven’t even begun to explore the massive selection of warm appetizers yet! Bear in mind that on Croatian menus, the warm appetizers are usually quite large and can equally be considered as a main dish. They’re best considered as equivalent to the ‘primi’ on an Italian menu.

The most commonly consumed is risotto, or Rižot in Croatian. Should you choose a black risotto, veal risotto, or maybe seafood? Well, in this author’s opinion, life is made for living, so why not try all three? Even if you order just one, you might not need a main dish as the portions are usually rather large.

Pasta is the second most popular appetizer. Usually, Croatians bracket themselves into two categories; team rice and team pasta. Although you can find Italian-style pasta (linguine, penne and similar) there are also some great local varieties – fuži, pljukanci, šurlice, makaruli. The taste and accompaniments vary from north to south, as well as with the seasons, from asparagus or truffles to meat or seafood, although the latter combination is not as popular with pasta.

Polenta can often be found in the appetizer section of menus, combined with cheese, truffles, or mushrooms. You might also see it offered as a side dish to some hearty main dishes such as goulash, brodetto, etc.

Buzara sauce is both a popular appetizer and main dish too. The most common varieties are mussels and shrimp buzara. If you start to tuck into a delicious buzara with a deep red hue (made with tomato sauce), you will most likely consider this equivalent to the main dish because the amount of the bread you will use for dipping this delicious sauce is… almost too much (I must stress the almost here!).

Štrukli, a traditional pastry made with cottage cheese, is always a popular appetizer, and there are plenty of regional variations to try. They are either baked or boiled, and ingredients vary from the most common recipes with cheese to pumpkin or onions. Many Croatians would argue that without fresh cottage cheese and the resulting slightly acidic taste, a štrukli can never really be a štrukli. If you hold any reservations about eating calories rich food, then look away now as traditional štrukli is further topped with heavy cream, sour cream, or even a mixture of both.

Juha or simply soup is a mainstay of every Croatians diet. It is hard to say if soup can be considered as an appetizer given the hearty helpings and the density of the ingredients in the bowl, but it is a popular dish on the menu. From light veal, fish, and veggie/minestrone style soups to creamier soups – potato, pumpkin, tomato, zucchini, or mushroom soups, all are warm, welcoming, and hearty. Croatians love to begin their meals with a soup at all times of the year, so don’t be put off if you see some locals devouring their favorite juha all the while sweating profusely in the heat of the July sun and smiling blissfully despite the heat!

Last but not least on our list we have stuffed vegetables. They are considered to be very tasty appetizers. While there are nearly endless family recipes throughout the country, the most common include eggplant and zucchini with various stuffings such as meat, cheese, or their own seasoned stuffing, baked and served piping hot. The memories of almost inhaling an entire stuffed eggplant as a kid are unconsciously making my mouth water, so maybe it is best to finish up here. On second thoughts, maybe an impromptu restaurant reservation is the cure!

Order a main dish at your peril!

You can enjoy a delicious and filling meal just by ordering a couple of cold and one warm appetizer, so don’t over-order. In all our Croatia destinations we provide detailed dining recommendations so you can be sure you’re hitting the top spots to try all the delights described in this article. 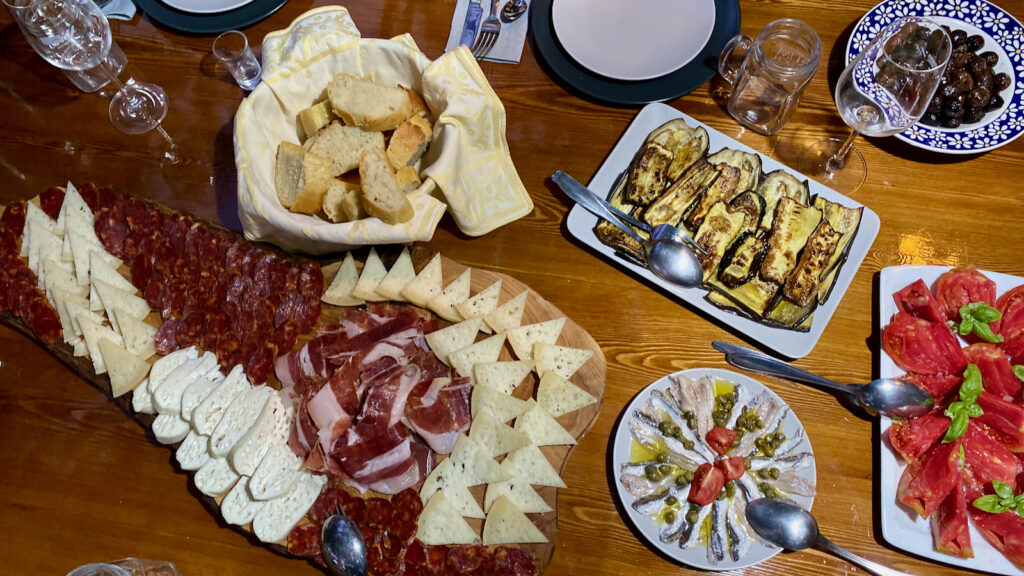 The Best Food & Wine Experiences In and Around Dubrovnik